The Reality of Food Plots

To see it on TV, food plotting looks fun. It’s always conducted under blue skies with light music, and the... 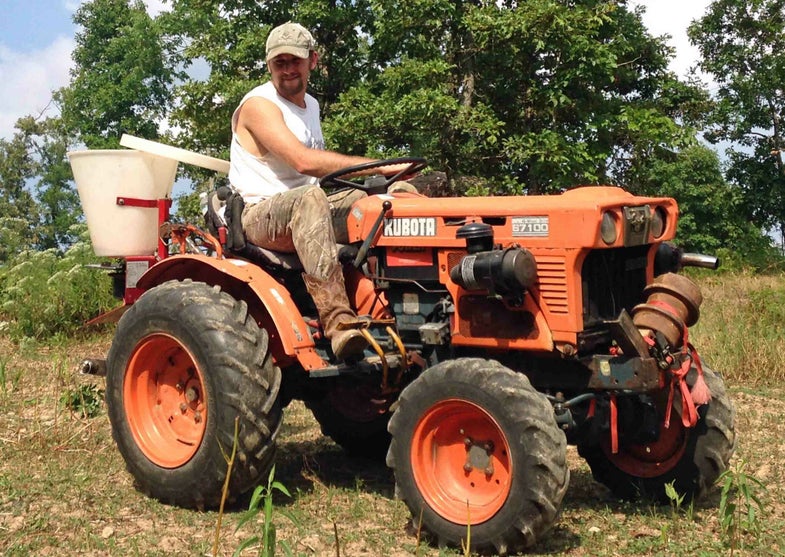 To see it on TV, food plotting looks fun. It’s always conducted under blue skies with light music, and the soil is never too wet or too dry to break with a shiny new disk. At the end of the day, a guy climbs down from the cab of his air-conditioned tractor that’s purring like a kitten. He scoops up a handful of fine, black dirt, and lets it fall through his fingers. As the sun sets, he supermodel wife, wearing cut-offs and cowboy boots, strolls toward him with a pitcher of sweet tea and a smile. She doesn’t hesitate to give him a big hug because, after all, he hasn’t broken a sweat.

Not once have I seen starter wires short out and catch fire because a squirrel had been chewing at them. I’ve never seen the delicate dance that can only be learned by sitting on tractor seat that a swarm of red wasps is calling home. I’ve never seen an acre’s worth of expensive ladino seed strewn across a 10-yard stretch of ground because the broadcast spreader was left open wide. Never heard a single cuss word.

Could it be that I’ve been food plotting all wrong, all these years? Or could it be that planting food plots is actually grueling work and the actors on outdoor TV only make it look fun because they’re selling you something? Hmm.

The truth is, I love food plots, once they’re done. I love seeing that first wisp of green on broken soil. I love seeing the first deer tracks and turkey turds in them. I like having to sneak out of a food plot stand at dark because the field is full of deer eating on my dime, exactly as I’d hoped.

Before you get any of that, though, you have days like the one I just had. The winter weather finally broke and it was dry enough, I figured, to head to the farm and break ground on a pair of new clover plots. As I pulled out of the driveway, I looked at my tool box sitting on the carport. “I should take that,” I thought.

I drove away instead.

The first order of business was cutting down a couple trees in one of the plot sites, to allow more sunlight to the ground. My chainsaw zipped right through the first one, and about three quarters through the second, larger one before seizing up and refusing to start again. No sputtering. No hint of what was wrong. That plot was done for the day.

With another one to plant that was completely free of trees, I simply headed toward camp to hook my tractor to the tiller. My tractor is a 16-horse Kubota that I bought for a song off Craig’s List. It’s not much larger than a riding lawnmower. My wife, Michelle, mocks it with her own version of Jason Aldean’s lyrics: “We can’t both fit on your little orange tractor, but I can walk beside you, down through the woods and out through the pasture.”

But for small food plots, it works pretty well. I’d made about four passes, and the ground was breaking up good. Just about the time I thought I might finish this plot before dark, the tiller dug up a root wad that wedged itself firmly between the tines. That happens all the time. Usually, I can free it up with a crow bar and a little coaxing with a sledgehammer. But those things were in my toolbox at home.

I had no choice but to drive the tractor back to camp and return another day with my tools. But about halfway there, the tractor began pulling so hard to the right that I couldn’t steer it. My back right tire had busted and was flopping around the axle.

I had known both tires were in terrible shape when I bought the tractor. But rather than replace them immediately, I figured I’d get whatever remaining mileage was left out of them, which turned out to be a full summer and most of this particular day. I had a bottle jack and a four-way lug wrench in my truck, and one of the nearby trailer parks had enough concrete blocks out front that I didn’t figure they’d miss a couple of them. I also figured that if I was going to replace one tire, I’d go ahead and get both.

The flat one came off just fine. The other one had apparently been replaced at some point in the tractor’s previous 30 years of life, and whoever had done it had lost a lug nut and replaced it with another that was only slightly off-sized for any of the ends of my four-way wrench. I had plenty of other wrenches that would fit it—in my tool box, back at home.

Ultimately, between fixing the broken chainsaw, two new back tires, and the fuel to make three round trips to the farm, my first food-plotting trip of the year only cost me about $500. I didn’t get a damn thing planted.

I guess some things are just too real for reality TV.