The Time Before the Killing

I’ve taken some former non-hunters out hunting, and almost without fail, they’re shocked at how boring, cold, and miserable this... 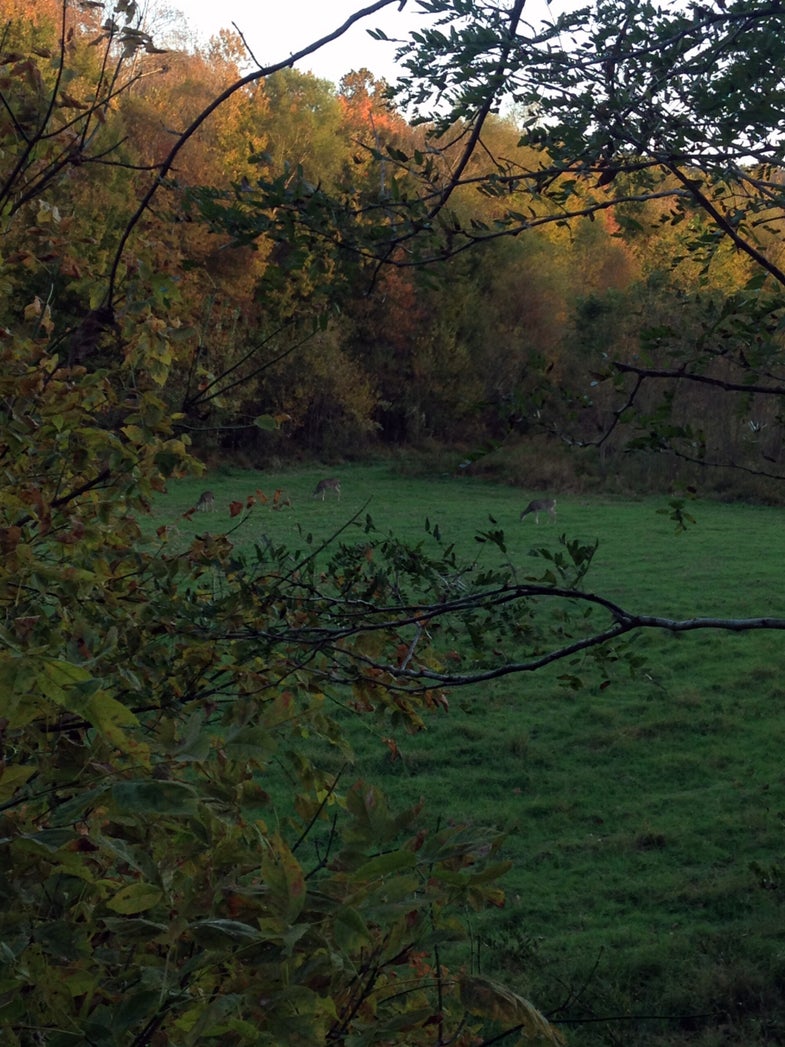 I’ve taken some former non-hunters out hunting, and almost without fail, they’re shocked at how boring, cold, and miserable this endeavor can seem to be. That’s understandable. In my experience, non-hunters initially imagine hunting as shooting and killing. But the time between when an animal is spotted and a shot is taken typically only burns up seconds of an experience that took hours, days, weeks—even months or years to create. It’s difficult to articulate why all that is fun to someone who’s never been there.

I snapped this photo from my stand yesterday evening, not really because I was planning to write about it or share it, but because I wanted to save it for myself. To the average non-hunter, it looks like a grainy iPhone picture of three deer standing in a green field, not much different than they’d see at a state park or a well-kept suburban lawn.

But I see a field where, back in the summer, my brother, Matt, and I walked around digging up shovelfuls of dirt. We put a good mix of it in a Ziploc, and I mailed it off to a lab for testing. I was given application recommendations for lime, nitrogen, phosphorous, and potassium—the magic ingredients that help plant life grow.

We carried that stuff in, one 50-pound bag at a time, and there was well over a ton of it total. We broadcast it, tilled it into the soil, and then planted a blend of ladino clover and chicory seed. I over sowed the field with winter wheat and annual rye grass—cereal grains that grow quickly and provide deer food when the abundant browse of the summer withers and dies.

Behind those deer, I see cover. Briars and brambles, wildflowers and saplings that I purposely left standing because to survive, prey animals require places to hide. You can barely walk through the stuff. But there’s a tilled-up loop surrounding the edge of it, and that’ll serve as a break for when I set that brush on fire this spring.

When truly left alone, habitat manages itself. Wildfires are nature’s way of “setting back” succession of vegetation, but of course, we have to control fires these days. So in many cases, we’ve taken it upon ourselves to set back unsightly brush by planting our fields and lawns with invasive grasses like fescue. It’s worthless to wildlife. So it pleases me to do what I can to improve and restore habitat, making it more favorable for wildlife—and in the process, a better place to hunt.

The view was good from my stand. The deer I could see told stories. There were two mature does and one fawn. Does that mean poor fawn recruitment? Did a coyote kill the other doe’s fawn, or did she simply not have a fawn last spring?

Probably neither. It’s late October. The fawn I could see was a doe. The “missing” fawn was likely a button buck, and the other doe had already run him off because the rut is not far away. Nature’s way of preventing inbreeding.

I could’ve easily killed something yesterday. I saw seven deer, eight turkeys, and a portly groundhog, any of which was perfectly legal to shoot. Instead, I climbed down without ever picking up my bow. With any luck, the killing will come in due time, and I look forward to my chance. But until then, I have plenty to enjoy.