The first time I met Cally Morris was at the 2013 NWTF Show. He was manning his Hazel Creek Taxidermy... 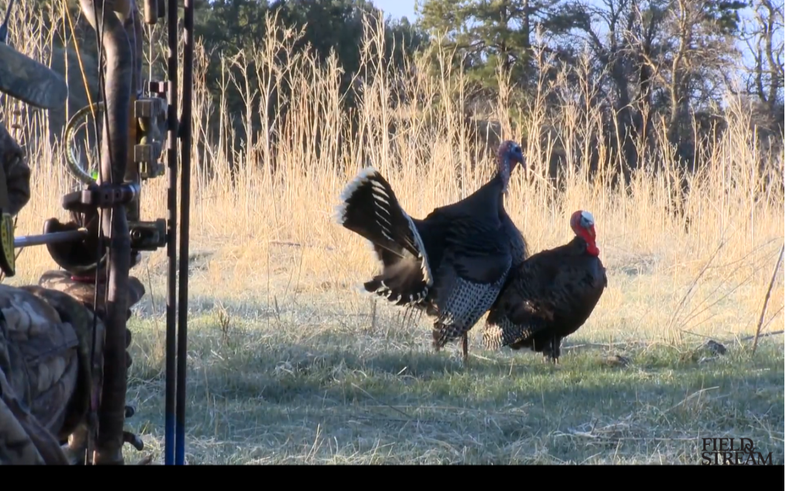 The first time I met Cally Morris was at the 2013 NWTF Show. He was manning his Hazel Creek Taxidermy booth alongside his wife, Annetta. Cally is a world-champion taxidermist who specializes in turkeys. The stuffed gobblers he had on display were impressive—but I was even more interested in the screen captures on his computer from various turkey hunts that he’d filmed over the years. Many of them captured a bowhunter’s shoulder, bow, and gobbler in the same frame. And none of them used a blind.

“How far away are those decoys from the hunter?” I asked him.

“How are you drawing a bow on those turkeys without a blind?”

“Because we know what we’re doing.”

Fair enough. I still didn’t fully believe what I was seeing. I’d been turkey hunting my entire life, and in multiple states. I’d tried many times to draw a bow on a turkey without a blind—and it didn’t work out very often.

Back in 2013, I only needed an Osceola gobbler to claim my first grand slam, and it looked like many of Cally’s best videos were from Florida.

“So this will work on Osceola gobblers too?” I asked him.

“This will work on any turkey. If you want to kill an Osceola, come with me this spring. Leave your gun at home and bring your bow.”

And so that’s what I did. On the third morning, I shot an Osceola at about 14 yards with my bow and no blind, with Cally filming over my shoulder. I’ve been addicted to bowhunting spring gobblers this way ever since.

Interestingly, when we were watching the footage of my hunt back at camp, Cally was unenthused. “I’d give this hunt footage about a 7 on a scale of 10,” he said. “It’s a little too dark, and you shot that turkey just a little too fast. It would’ve been better had you let him beat the decoy a while longer, but you’re a redneck and you got excited. I thought I was going to have to give you a beating to stop you from shooting that jake earlier.”

That was true. I really wanted to shoot that jake.

Cally, as I learned, is a perfectionist. It’s no doubt the trait that’s helped him most in the taxidermy business, but it comes through in just about everything he does. I’ve hunted with him a bunch since that trip to Florida, and sometimes, when we’re setting up on a gobbling bird, he simply drives me insane. My instinct is usually to get closer, sit down fast, and kill the turkey. His instinct is to slow down and plan for the perfect video of killing the turkey. Sometimes, a killable bird walks because the video elements just don’t come together, and that’s frustrating. But it’s what makes Cally’s turkey footage the very best I’ve ever seen.

For several years now, these hunts have been airing on the 15-Yard Files—Cally’s online exclusive hunting show. This spring, we’re going to be showing the newest episodes of The 15-Yard Files here on the Tagged Out blog, starting with this one from the 2015 early archery season in western Nebraska. Annetta—whom we profiled here a while back—is behind the bow. If you’re a turkey hunter, I promise you’ll appreciate what you see in this video.