Video: Run and Gun Gobblers With a Bow

So I’m hijacking Whitetail365 again, but it’s for a good cause. It’s turkey season, after all, and I know both... 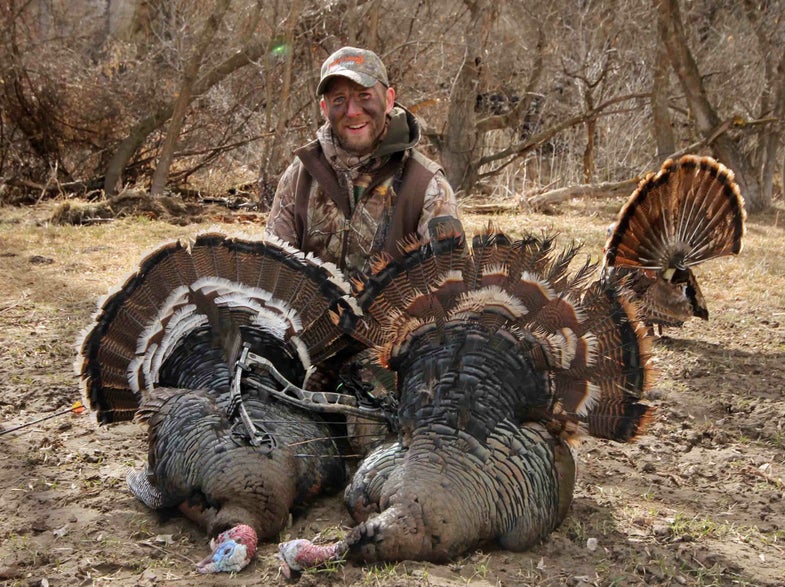 Two Nebraska gobblers taken with a bow and no blind. Will Brantley
SHARE

So I’m hijacking Whitetail365 again, but it’s for a good cause. It’s turkey season, after all, and I know both Bestul and Hurteau take their turkey hunting almost as seriously as they take their deer hunting.

Much as I love to deer hunt, spring turkey hunting is my favorite. And over the past few seasons, I’ve become especially addicted to hunting them with a bow because I’ve learned that I don’t have to camp out in a ground blind to be successful. Waiting in a blind is still probably the most productive way to kill a turkey with a bow—but I spend all fall sitting and waiting on deer. Spring’s too short to spend it like that. When you lose the interaction of maneuvering on a gobbling turkey, you lose the real essence of the game.

My buddy Cally Morris, owner of Hazel Creek Taxidermy and host of the popular online webisode The 15-Yard Files, is a master at running and gunning turkeys with a bow, and I’ve learned a lot while hunting with him over the past few springs. Bowhunting turkeys without a blind is highly dependent on good decoys, but every single piece of the puzzle must come together just right. Your setup and placement of those decoys must be precise, because you must position the gobbler perfectly in order to draw your bow. And the draw must be timed just right. Do that, and it’s amazing what you can get away with, sitting in the “wide open.” That’s what this video, partially filmed with a bow-mounted Tactacam during Nebraska’s 2014 early archery season, is all about.