A Drainage Problem: Lake Erie and the Louisiana Coast Suffer from the Same Illness

Illustration by U.S. Army Corps of Engineers Sometimes connecting the dots is depressingly simple. Last week brought us an example,... 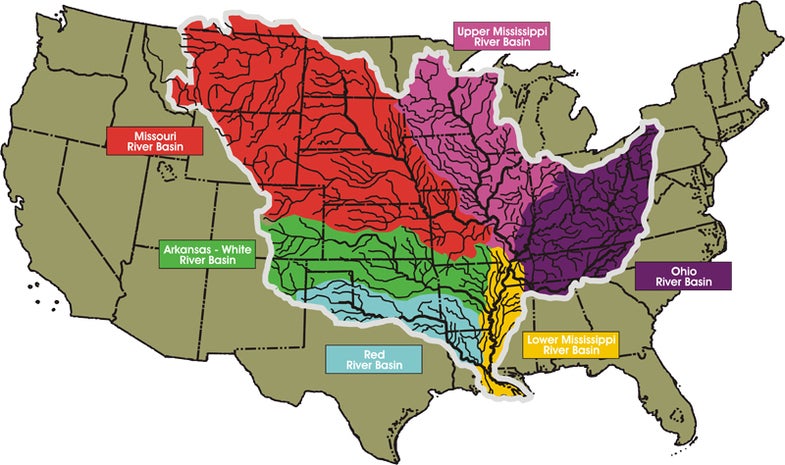 Sometimes connecting the dots is depressingly simple. Last week brought us an example, when residents of Toledo, Ohio were told their tap water was not safe to drink due to an algae bloom in Lake Erie.

The primary drivers of the blooms: runoff from farms and livestock operations, as well as other non-point sources.

It spreads in the warm weather months when huge algae blooms begin to die and decompose. The primary drivers of the blooms: runoff from farms and livestock operations, as well as other non-point sources.

Toledo and Louisiana’s coast are about 1,000 miles apart. But those dots are connected by the Mississippi River drainage. The key word here is “drainage.”

Water that drains into our lakes and rivers from rainfall, snow melt, and lawn sprinklers often arrive after covering some pretty polluted ground. Drainage can be loaded with the chemical compounds from fertilizers, insecticides, livestock manure, human waste, oil and rubber from highways, as well as seepage from landfills.

The basic rule of setting safety standards for consumption of water has long been “acceptable risk.” Our pollution control programs are not designed to guarantee the resource is devoid of pollutants, but to make sure the health risk is minimal. It led to the unofficial motto, “dilution is the solution to pollution.” In other words, if the amount of clean water or air is large enough, it will dilute the amount of poison being allowed so much that the risk to humans is very low.

That was a problem back when the population of the nation was 150 million. Now that we’re at 330 million and counting, it’s impossible to ignore – and we know it will only get worse.

That’s why conservation groups have been pushing for tighter regulations on non-point source runoff. But as with most movements that call for tighter regulations, there has been massive pushback from the businesses that would be forced to stop dumping their pollution into our water. The politicians they bankroll are not saying “We’re for pollution!” They’re pulling out the old red herring “Too much federal government control!”

Sportsmen pushing to bring back the Chesapeake watershed to its previous glories found that out when 21 states – from as far away as Alaska – join a legal fight to stop them.

The lessons from Toledo and Louisiana are pretty obvious.

First, there must be tighter control on what private landowners and industries can dump into public waters, because it’s not just a problem for fish and wildlife.

Second, distant cities and states are often part of the same ecosystem, which means what Ohio or Minnesota or Illinois dumps into the Mississippi drainage impacts those who live at the bottom of the system in Louisiana, and the rest of the Gulf. Louisiana’s coastal estuaries, also being degraded by the pollution from upriver, are critical to 95 percent of the Gulf marine fisheries. So in a very real sense, what Ohioans dump into their lakes can have negative impacts on anglers from Florida to Texas.

Don’t believe me? Look at a map of the Mississippi River drainage. There are a lot of dots that connect.