As More Oil Spills into the Yellowstone, More Infuriating Indifference

For the second time in less than four years, a broken pipeline spilled oil into the Yellowstone River, this time... 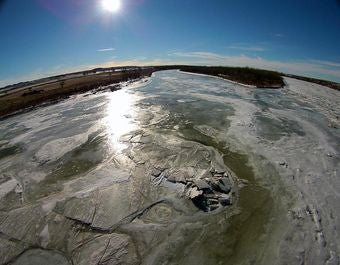 For the second time in less than four years, a broken pipeline spilled oil into the Yellowstone River, this time about five miles upstream of Glendive, Montana. More than two weeks later, most of the oil is still in the river. This is the mighty Yellowstone River we are talking about, born in the high country snows of the nation’s first national park, the major artery of life-giving water in a bone dry land, a river that has appeared on every map of the American West since those maps were drawn with ochre and campfire soot on a scrap of pronghorn hide.

Due to the ice cover, and a spate of unseasonably warm weather that makes the ice too dangerous to work on, only about 1200 gallons of an estimated 39,000 to 50,000 gallons have been recovered from the river so far. About 100 emergency workers responded to the January 17 spill, which came from the Poplar Pipeline operated by Bridger Pipeline LLC, which is owned by True Companies of Casper, Wyoming. The ruptured pipe, built in 1967, was 12 inches in diameter and carried about 42,000 gallons of crude per day from the Bakken oilfields to Baker, Montana. It was supposed to be buried eight feet below the bottom of the river, although a 120-foot section of the pipe was found to be exposed. A 2011 inspection showed the pipe was even then “at moderate risk for failure” and was buried in an area along the south bank of the river that was rapidly eroding and at risk from ice scouring.

Glendive (population about 6000) citizens reported the smell of diesel fuel in their tap water by January 18th, and testing revealed unacceptable levels of benzene and other petrochemicals. On January 20th, residents were lining up at public distribution centers for bottled water, which had been trucked in by the pallet-load.

A sheen of oil appeared on open water in the Yellowstone as far east as Sydney, Montana, 60 miles downriver. Bob Gibson, of Montana Fish, Wildlife and Parks, told Billings Gazette outdoor reporter Brett French that even at Intake, 26 miles from the ruptured pipeline, “the air smelled of oil.”

Bridger Pipeline LLC has also been distributing thousands of gallons of drinking water for Glendive residents.

As of January 29th, Glendive’s water is supposedly safe to drink as long as users have extensively flushed their systems.

The January 17th oil spill into the river follows the July, 2011 Exxon Mobil spill where about 63,000 gallons of oil from a ruptured pipeline near Laurel, Montana killed fish and wildlife and contaminated farm and ranchlands for about 85 miles downstream. Exxon recently paid a $1.05 million federal fine related to the pipeline break, because regulators found that the company has chosen to keep operating the pipeline during the historic flood that summer, when other companies had shut down operations due the huge amounts of debris coming down the river, and the tremendous level of scouring and erosion caused by powerful currents that might expose the pipes.

The pipeline ruptures come at a time when Congress has just approved the Keystone Pipeline, which, if constructed, will cross under the Missouri River just below Fort Peck Dam at the community of Nashua, and under the Yellowstone River about 25 miles upstream from Glendive, or 20 miles upstream from the current pipeline rupture. The Keystone Pipeline will carry about 830,000 barrels of tar sands oil per day (a barrel of oil contains 42 US gallons). TransCanada, the company that wants to build the Keystone Pipeline, claims that it will be buried 25 feet beneath the Yellowstone and the 13 other major American rivers it will cross, making it safe even during a 500-year flood event.

Proponents of the Keystone Pipeline say that oil spills such as those last week and in 2011 point out the need for modern pipelines, rather than relying on the current rapidly failing infrastructure comprised of an estimated 61,000 miles of pipelines. Referring to the new spill, Montana Senator Steve Daines (R) told the Associated Press, “What this oil spill has done, is it makes clear that we need to be building the most technologically advanced and state-of-the-art infrastructure, pipelines like the Keystone.”

Debates over the pipelines aside, Montana farmers and ranchers, and residents in towns like Glendive, know this: if we keep dumping crude oil into the Yellowstone River, they’ll get ready to migrate. Rainfall in the Glendive area averages about 11.5 inches annually. A desert is defined as part of the earth that gets 10 inches of rain or less every year. Most agriculture in the area is dependent on irrigation. Most drinking water comes from the river, or from aquifers charged and recharged by the river.

The lower Yellowstone River near Glendive has become an extraordinary smallmouth fishery. During the snowmelt weeks of early summer, 26 miles downstream from Glendive at Intake, sometimes it seems as if every hardcore paddlefisherman in Montana shows up to try and fill a tag on the prehistoric giants. Long summer days spent swimming in the eddies and drifting bottom rigs with nightcrawlers and minnows are a tradition here, and you never know whether the next bite you get will be a sauger, a big channel cat, a walleye, or the sudden implacable, hooked-a-truck feeling you get when a big shovelnose sturgeon comes tight to a circle hook. Montana Fish, Wildlife and Parks biologists are working to study the effects of the latest spill on this fishery, and have issued a fish consumption advisory for the river downstream from the spill.

The photos of oil-smeared river ice, of crews bundled against the Montana winter trying without much effect to clean up the spill, of fisheries biologists removing goldeye (a strange little predatory native fish) from trammel nets set downstream of the pipeline, are depressing. But much more disturbing is the impression left behind by news coverage of the spill and its effects that this is nothing really to worry about, that fouling rivers and drinking water supplies is business as usual in a nation dependent on petroleum. This story written by National Geographic’s Christina Nunez is a case in point.

Glendive residents who were quoted in the story claim they are not worried – that they don’t drink their tap water anyway. Says one local bartender, “People joke, ‘Don’t drink the water, because animals die in the Yellowstone River,’” and explains that many people from the town get covered in oil at their work on the rigs in the Bakken, and so don’t worry much about the spill. EPA veteran oil spill responder Paul Peronard says “None of us anticipated the drinking water problem,” and explains that because Glendive’s water is so heavily chlorinated (necessary because of high levels of agricultural runoff into the river) that it was difficult to even smell the benzene and toluene that tests showed were present in the tap water from the spilled oil.

The story is clearly not written by a fisherman. Nor were any of the thousands of people like myself, who love the Yellowstone and take their kids fishing and swimming on the lower river every summer, interviewed. There is no passion there, no sense of outrage. There is passivity in this story, and in other coverage of the spill, that is distinctly un-American. It is, perhaps, an example of a new normal that we are being commanded to accept, of oil spills, brine spills, agricultural runoff that fouls rivers, and intentionally contaminated aquifers in the midst of drought.

If we are going to be one of the world’s largest producers of oil, natural gas and agricultural commodities for a booming world, we are going to have to demand and enforce much better protections for our lands and waters. Lowering our expectations is not a solution. Leaving the task of protecting our resources to those who have no idea what is really at stake, will not work for us. The Yellowstone oil spill does not have to be a new and perverted normal. It can be the beginning of an era when we produce what we, and the world, needs, without ruining our own country and giving up what we love. Sportsmen must lead the way.