BP Oil Spill Fine: What It Means for the Future of the Gulf

Photo courtesy of Petrarchan47/Flickr. Last week BP agreed in principle to pay $18 billion for damaging the Gulf ecosystem and... 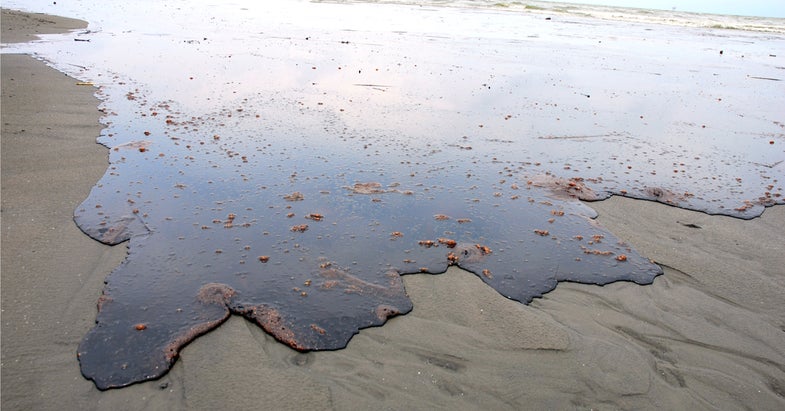 Last week BP agreed in principle to pay $18 billion for damaging the Gulf ecosystem and the economies that depend on it.

So, is this a happy ending? A terrible deal? Or a better beginning?

There are arguments for all three, which can be found in the details of the aftermath.

Our wetlands already were—and are—being lost to the Gulf of Mexico at the rate of a football field every 48 minutes, due largely to the influence of the oil and gas industries.

The BP spill accelerated that disaster to warp speed wherever it coated the roots of mangroves and marsh grasses.

Many of the islands and reefs that had been important parts of our ecosystem—and of our lives—for generations were already dying before the oil came, but we still had a fighting chance to save them. BP’s oil killed that chance.

The last five years have been spent attending the funerals for places many sportsmen have known since they were children. We have only photographs to explain to the next generation what once stood in the open water they see today. And the dying continues.

No one is sure what that could mean to future generations of spotted sea trout, red drum, flounder, tuna, tarpon, snapper, amberjack, waterfowl and many other species that rely on this ecosystem.

So no one should think this agreement—or any other—puts an end to this disaster.

Instead, it should be the first thing that comes to mind when politicians press to weaken regulations on oil and gas development—as they have been doing aggressively for the last 10 years.

The industry will say BP’s fine will be a deterrent to reckless behavior in the future, and that’s true. Even environmental groups agree the Gulf oil industry is safer and more responsible five years after the Deepwater Horizon. But that disaster has also made painfully clear the high costs associated with the risks of failure.

The money and where it’s going. BP got off easy. The judge had already ruled that the giant corporation was liable for up to $18 billion in fines just for violating the Clean Water Act. The two sides were still arguing how many more billions the company would be on the hook for damages to natural resources such as wetlands, fish and wildlife as well as lost revenues to the huge industries—and the tax dollars local and state government were denied due to those impacts.

So why the deal? The states had to balance a sure thing—and a very fat one at that—against the possibility of something less from the judge, as well as the likelihood that BP could keep a final judgment tied up in court for years to come.

This is what BP has tentatively agreed to:

• $5.5 billion for violating the Clean Water Act—payable over 15 years
• $7.1 billion for damage to natural resource damages—payable over 15 years
• $232 million to cover any further natural resource damages that are unknown at the time of the agreement
• $4.9 billion over 18 years to settle economic and other claims made by the Gulf
• Up to $1 billion to resolve claims made by more than 400 local government entities

The best news in the agreement is that Louisiana will receive the largest awards—about $6.8 billion. That’s only appropriate; with the rig just 50 miles from its coast, this state clearly suffered the most damage. But it’s also important to the rest of the Gulf states. That’s because Louisiana’s 50-year, $50-billion plan to prevent the loss of the Mississippi River delta is also essential to the entire Gulf fishing community. Researchers say as much as 95 percent of Gulf fish are estuarine dependent—and most of those estuaries are what Louisiana is trying to save.

Computer models show if the major projects in that plan are implemented on schedule by 2060, Louisiana could be gaining more coastal wetlands in aggregate than it is losing (barring any worst-case scenarios for climate change and sea level rise). But for the state to stay on that schedule, it must be spending about $700 million to $1 billion a year—a goal of which it was soon to fall short. The BP awards will give it a lifeline for another 10 to 15 years, state officials say, enough time for them to hopefully find another funding stream.

That would be the only ending to BP’s agreement that could be termed “happy”—and then only if this ushers in a new era of responsible energy development.