It’s working. That’s the message that Secretary of the Interior Sally Jewell gave on Friday at an event in Colorado... 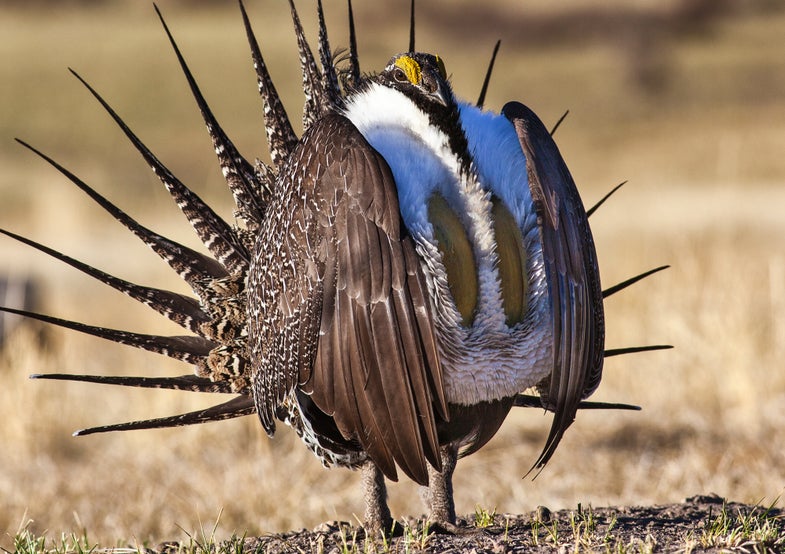 Secretary of the Interior Sally Jewell praises decision not to list the greater sage grouse under the Endangered Species Act.. Bureau of Land Management
SHARE

That’s the message that Secretary of the Interior Sally Jewell gave on Friday at an event in Colorado marking the one-year anniversary of the U.S. Fish and Wildlife Service’s decision to not list the greater sage grouse under the Endangered Species Act.

Jewell and Colorado governor John Hickenlooper said the collaborative conservation efforts—an unprecedented undertaking by federal, state and local agencies working closely with conservation organizations, private landowners, and industry—to keep the bird off the list are paying dividends. A large part of the listing decision was based on federal land use plans that were changed to protect sage grouse habitat, but a key factor in the conservation progress has and continues to be the cooperation between the public and private sectors.

“Last year when we made our announcement, I said it was really the starting point. Now, a year later we are in the thick of the work,” commented Secretary Jewell during the roundtable discussion September 21 at the Rocky Mountain Arsenal National Wildlife Refuge in Denver, Colorado.

Jewell described how novel rangeland fire restoration efforts fight the potential invasion by cheat grass, an invasive species that creates more frequent and intense fires, destroying habitat; how fire management maps now flag core sage grouse areas to ensure that these areas receive high priority; and how even prison inmates are getting involved by growing sagebrush plants through a community service project. She shared a report released by the Interior Department that outlines these and other success stories since the listing decision.

A key component of the decision to not list sage grouse was the completion of 98 land use plans that were finalized by the Bureau of Land Management (BLM) and U.S. Forest Service just days before the announcement. To provide clarity on implementation of these plans, the BLM recently issued [Instruction Memorandums (IMs)](http://wildlifemanagementinstitute.org/index.php?option=com_content&view=article&id=931:blm-directs-implementation-of-sage-grouse-plans&catid=34:ONB/ Articles&Itemid=54) focused on specific areas of concern, including grazing management and energy and mineral development. The IMs were written with active involvement by state agencies and other stakeholders in sage grouse country. Jewell said that these IMs, and the engagement of career employees throughout the Department, will help to institutionalize the conservation efforts and keep them moving forward through the transition to a new president.

“There will be a changing of the guard on January 20, 2017, but there will be no change in the commitment from the federal family,” said Jewell.

Governor Hickenlooper, who co-chairs the Western Governors’ Association’s Sage Grouse Task Force with Wyoming governor Matt Mead, concurred with Jewell. He noted that many were concerned that the states would back off their conservation efforts once the “hammer” of a listing decision went away. If anything, he said the decision not to list the bird makes collaborators even more committed to making sure that they are not back in the same place in 2020, when the Fish and Wildlife Service is required to review the listing decision.

One key component of the ongoing conservation effort is the work with private landowners that is being done through the Natural Resource Conservation Service’s (NRCS) Sage Grouse Initiative.

Since 2010, the agency has engaged over 1,300 ranchers to implement conservation measures on over 5 million acres. Most importantly, in August 2015 the NRCS committed to continuing funding for the Sage Grouse Initiative for the duration of the current Farm Bill, dedicating an additional $211 million through 2018 in their “SGI 2.0” plan.

These voluntary, incentive-based opportunities to work with ranchers and other private landowners were touted by ranchers T. Wright Dickinson and Pat O’Toole, who attended the meeting.

“We need to make sure there’s a future for agriculture in the West,” O’Toole noted. Dickinson agreed, citing the thousands of acres of open space managed by multi-generational ranchers who are playing a key role in protecting the core values of the western landscape—and vital sage grouse habitat. The health of rangelands within the sagebrush sea is dependent on ensuring that ranching families continue to have the opportunity to keep ranching.

But not everyone agrees with the plan. Over the past 12 months, lawsuits have been filed by local and state governments as well as some energy and ranching groups, claiming the overly restrictive plans would stop or significantly curtail ranching, energy and mineral development on public lands. Their battle is also being carried in language currently in the National Defense Authorization Act, must-pass federal legislation that would essentially give governors veto authority over the federal plans—a slippery legal slope that has the potential to go well beyond the sage grouse issue. At the same time, some environmental groups have sued the government, stating that the plans don’t go nearly far enough and that there are too many loopholes for energy development.

Jewell joked that she’s never been sued so much in her life, but the fact that they are being sued by both ends of the ideological spectrum might just mean that they struck the right balance. And with a range of groups at the meeting expressing their continued commitment to the effort, many commented the hope that the collaborative path carved out on sage grouse might show a paradigm shift for future landscape-scale conservation. As Kate Zimmerman, senior public lands advisor with the National Wildlife Federation stated, “We hope that this becomes the pattern, not the exception. For us, it is not about getting an animal on the list but about getting them on a healthy landscape.”

Those at the meeting recognized that the impressive increases in sage grouse populations—Colorado governor Hickenlooper cited an 83 percent upswing in the last decade—are a great success but that grouse populations are cyclical. Long-term success will come with continued collaboration over the long haul, and with consistent application of management decisions. They also agreed that all those engaged in the process need to stay committed to the process and continue to work together. As John Swartout, natural resource advisor to Governor Hickenlooper stated, “We cannot descend back into the adversarial roles that are so typical of endangered species efforts if we hit a roadblock.”

Noreen Walsh, regional director of the Mountain-Prairie region for the U.S. Fish and Wildlife Service, reminded the group of the mission’s goal. “There are 350 wildlife species that make their home in the sagebrush sea, but it’s a place where people live too. We have to have a healthy sagebrush ecosystem that works for both wildlife and people. That’s the vision the Service wants to create.”