We Have Duck Stamps. How About a Birding Stamp?

Here’s a scene I’ve always dreamed about: A birder is on station at a national wildlife refuge, catching the fall... 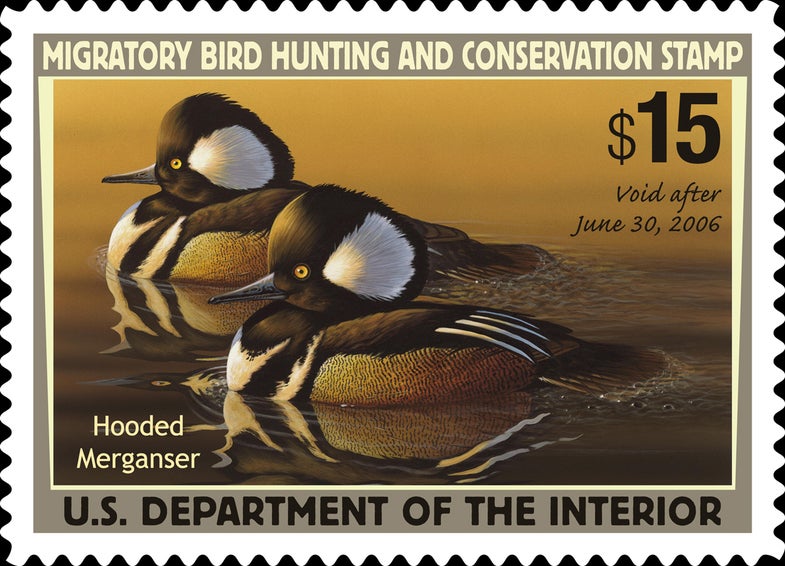 A birder is on station at a national wildlife refuge, catching the fall flight of neo-tropical migrants, pulling his eyes from his pair of high-priced binoculars only long enough to put another check in his life-list book.

Then he’s approached by a federal game warden who has a simple question:

“Can I see your migratory bird stamp, please?”

That dream replays almost every duck season when I sign my $25 mandatory duck stamp and stick it onto my hunting license. Not because I resent having to purchase a duck stamp while other users of the same resource get a free ride. In fact, I’m proud of the role hunters have played saving habitat that benefits wildlife and humans. But I also know the nation could do so much more if all the other recreationists who cherish these resources also pitched in.

All of which brings to the opposition by some duck hunters—and artists—to a proposal by the U.S. Fish and Wildlife Service to have other bird species join ducks on the migratory waterfowl stamp.

According to a report in the New York Times, the hunters object to sharing the stamp with species other than ducks (their main concern), while the artists think crowding the stamp with other species would be “as aesthetic disaster.”

USFWS Director Dan Ashe said the move is intended to boost sales of the stamps, which have been slumping along with the number of waterfowlers. In 1970, two million stamps were sold, while about 1.1 million are sold today. The agency hopes that including other birds on the stamp might attract volunteer purchases by bird enthusiasts.

Adam Grimm, who has twice won the duck stamp competition, pooh-poohed that idea, telling the Times that “Birders aren’t going to go out and buy a duck stamp because it has a little oriole on it.”

I agree with Grimm—and Ashe.

The rising cost of land and the falling number of hunters means the income from duck stamps can’t possibly hope to win the race to save our rapidly decreasing base of wetlands. So, yes, we need more participants.

So, here’s a different proposal: Why not mandatory birding stamp for federal lands?

The money hunters pay to protect habitat supports not only the hunting industry, but also manufacturers who provide equipment for the long list of so-called non-consumptive users—including birdwatchers. In fact, the USFWS says the money spent on wildlife watching exceeds the $10 billion a year sportsmen spend on their pastime. Pessimists will point to past failed attempts to expand excise taxes to outdoors gear such as backpacking and hiking boots. Those were opposed primarily by the manufacturers of that gear.

But this effort would be focused solely on the users. And most of the birders I know likely would have little opposition.

So before changing the traditions of the very successful duck stamp program—and the cottage industry it has spawned—try another approach.

Two stamps could be better than one—especially if it’s crowded with too many birds.