The water rationing underway in California due to the record drought hitting the entire West offers an old lesson for... 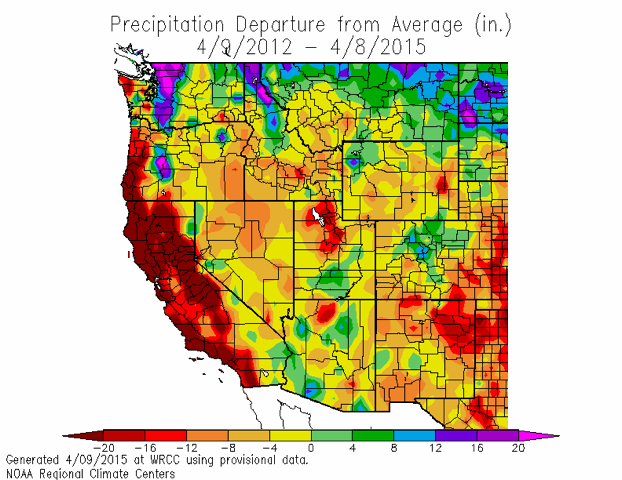 The water rationing underway in California due to the record drought hitting the entire West offers an old lesson for us in the hook-and-bullet crowd: Because our passions depend on a functioning ecosystem, what happens to any one part of that system eventually impacts us all.

Most people pay little attention to natural events that don’t immediately affect them–if the sky is blue over their heads, all’s good in the world. That tendency may be even stronger among sportsmen because one thing that draws us to our sports is the sense of a personal relationship with nature. We become intimate friends with our local duck marsh or deer woods. We’re attuned to and care about its health.

So a bass angler in Florida might not be alarmed upon hearing about the loss of protections for habitat along Western trout streams. And a trout fisherman in Montana might judge news that rising sea levels swamping Gulf Coast estuaries as unfortunate, but someone else’s problem.

First, there is a moral responsibility to our brother and sister outdoors folk in other states. They are like family.

Second, in the case of government regulations concerning how air, water, and public land are used, the rules that apply in Montana also apply in Florida, and vice versa. If Congress gives industries permits to drain wetlands along Western trout streams shorelines of bass waters in Florida could eventually be at risk.

Finally, while there are many local ecosystems, they are all tied to the larger, global system. As our species continued to grow exponentially, crowding into every corner of every continent, impacts to one part of the planet are having a much greater–and faster–impact on the rest of the world. One result is that the buffer zone between the sanctuaries of our duck marshes and deer woods and the rest of the world have shrunk to almost nothing, whether they are publicly or privately owned.

That means the carbon pollution contributing to the thermal expansion of oceans drowning Gulf estuaries eventually could also warm the waters of the West, dramatically reducing the range of cold water trout, according to Trout Unlimited and the National Climate Assessment 2014.

The fight over acid rain may have been the first traditional environmental issue that taught sportsmen the future of our traditions is rooted in the health and security of the broader ecosystem. When it was proven that pollution–primarily from power plants–was killing forests and fish thousands of miles from the emitting smokestacks, anglers and hunters joined with green groups to push through programs and regulations that corrected the problem. We learned what an insult to the larger ecosystem eventually caused injury in our own backyards.

The fierce record drought now ravaging the West is teaching us a similar lesson.

Research shows drought is cyclical in that part of the continent; indeed, some geologists say it is actually the norm, according to the Star Advertiser.

But in the nation’s drive to expand, we re-worked nature’s western plumbing system so we could raise crops and livestock and create communities in regions too dry to support that growth naturally. That system depends on snowmelt from the Western mountains to refill huge reservoirs used to slowly release water to agriculture and cities, so those demands won’t drain the naturally thin aquifers.

The system worked OK until the wet times ended, just as the amount of pollution we pump into the air was causing global warming is beginning to strengthen its grip on the hemisphere. (Research from Richard Seager, Columbia University on Climate of Southwestern U.S.)

But the reservoirs have already been sucked to record low level, recent winters have left some of the thinnest snow packs ever – and the forecast is for more of the same.

Now not just California, but the entire West is looking at an increasingly dry future, with climatologists predicting its worst drought in over 1,000 years in this artcle from National Geographic.

The maps here show just how dry the region has been for the last three years. With conditions expected to become more dire, water rationing decisions eventually could come down to choosing between humans, crops, and livestock–or fish and wildlife.

There were opportunities in the past to address the insults we were making to the natural water system of the west, voices raised warning this was not a zero-sum game; that unregulated growth eventually would overwhelm the environmental infrastructure it was drawing on. Sportsmen in those specific areas might have been alarmed, but numerous hunters and anglers in distant states probably thought: This isn’t my problem. Now it is.

All of which brings us back to the lessons sportsmen should take from this disaster, whether they live in California or the rest of the nation.

If we fail to address carbon pollution inflaming the disaster out west, it will eventually visit most corners of the country.

If the nation decides to aid westerners by shipping water from other regions, that will result in lower water tables for the rest of us.

If Congress reacts by trying to tear down environmental regulations that could help prevent similar disasters–such as the Clean Water and Clean Air acts–your own woods and waters will eventually be sacrificed.

And this won’t only impact sportsmen dependent on public lands. Drought doesn’t stop at posted signs. Neither does air or water pollution. We can’t protect our own duck marshes and deer woods if we aren’t involved in what happens beyond it.