Why Should You Love the LWCF? This New Guide Reveals All

Finally: An easy way to explain the importance of a hard-to-say conservation program. I’m talking about the Land and Water... 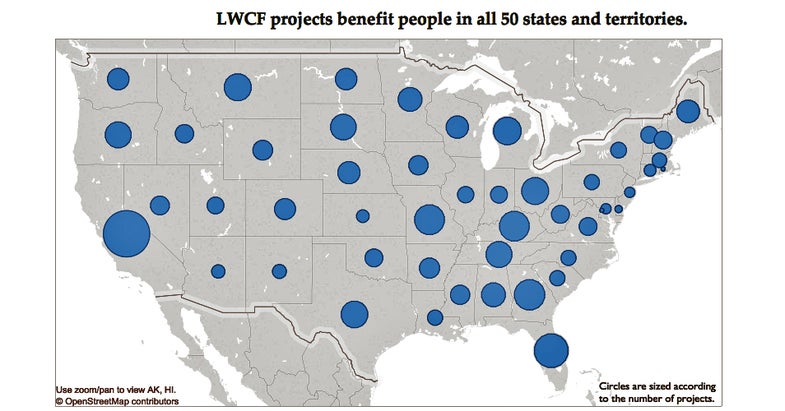 Finally: An easy way to explain the importance of a hard-to-say conservation program.

I’m talking about the Land and Water Conservation Fund, that slice of offshore mineral-extraction royalties that are critical to the future of outdoors sports. Congresses and administrations have consistently underfunded it, and some in power now want to pare down its slice even further.

Trying to explain the role of the LWCF to sportsmen can take up several pages of type. Not any more.

The research group Headwater Economics analyzed LWCF’s efforts between 2011 and 2014 and put them in simple interactive graphics that tell sportsmen what this program has accomplished in their states and the nation as a whole. Any sportsman paging through the different screens will quickly learn just what this program means to the future our traditions.

Created by congress in 1965, the LWCF was one of the most logical and forward-thinking conservation statements in the nation’s history: Our country would use part of the proceeds from harvesting some of our public resources to protect and preserve other public resources for future generations. This wasn’t a wild money-grab; Congress put a $900 million annual cap on contributions.

But in the 50 years since then, the LWCF has only been fully funded twice. The money that should have gone to the program was used for other purposes.

The constant reneging on the promises made in 1965 has helped create a growing deficit in our commitment to pubic lands. Yet getting sportsmen—as well as other Americans—interested in this vital issue has been difficult.

People often ask me why certain important conservation issues don’t seem to grab the attention of sportsmen. After working on this beat now for decades, I’ve come to some conclusions. One of those is the importance of the battle cry. It has to be short and punchy—something folks can remember without thinking too much. For example: Save the Everglades! Protect Bristol Bay! Stop the public-land grab! You can even use acronyms, if they’re short and easy to spit out: Keep CRP!

Which brings us to the Land and Water Conservation Fund. That’s a real a mouthful. So is the acronym LWCF. Getting people to pay attention, and do a little looking on their own, has been hard. Thanks to Headwater Economics, you’ll know in a hurry why you should care.