Way back in the 1990s when Bubba was playing humidor with Monica, Field & Stream ran a series of uncharacteristic,... 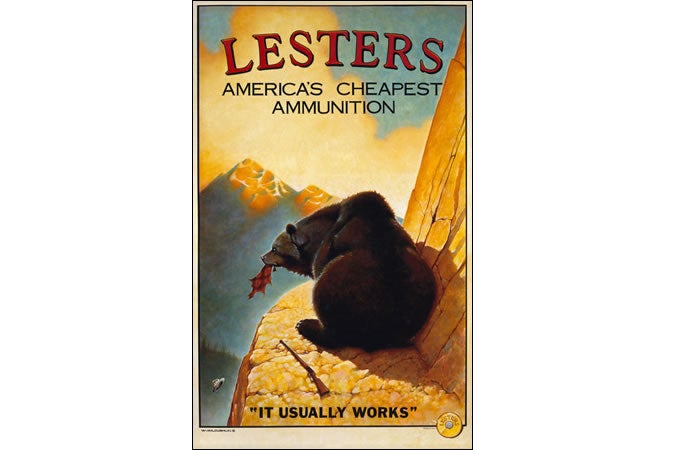 Way back in the 1990s when Bubba was playing humidor with Monica, Field & Stream ran a series of uncharacteristic, twisted humor pieces by an artist/writer who called himself W. Hardbark McLoughlin. “Bark,” as his friends called him, came to F&S via National Lampoon during its glory days. He combined an absurdist sense of humor with hyper-realistic, grotesque paintings. Some of his stuff became classic, such as “Lester’s Ammo” and it was collected into a book of golden-age-of-outdoor-art parodies called Hook and Bullet.

Wayne Hardbark McLoughlin, artist, gun nut, knife nut, humorist, United States Marine, and my friend, died on July 5th of non-Hodgkins lymphoma, pneumonia, and a hospital infection. I went to see him in April. Bark had improved after a dreadful winter, and we thought we might even go hunting again this fall, but it was not to be.

Bark was a combat Marine. He enlisted in the ‘60s and was sent to South Vietnam, Republic of, with the First Marine Expeditionary Force. He got himself shot as a result, and had a recurring nightmare in which he and his platoon were in their fighting holes at night, and in the darkness in front of him the NVA began to rise up out of the mist. There were far too many of them to stop, and it was at that point that he would wake up sweating.

Bark took his nickname from the 60s western Hombre, in which Richard Boone says to Paul Newman, “Mister, you’ve got some hard bark on you.” He loved the movie, and that line.

The last time we saw each other, Bark gave me a memento that he had acquired when he visited Guadalcanal. It’s a badly rusted, non-functioning .32 Colt Police Positive revolver that had lain on the ocean floor where the Marines came ashore in 1942 for God knows how many years. The grips are gone, the mainspring is gone, the cylinder is completely rusted through in places and there are no rounds in it.

The Colt is mute. I’ll never know who owned it, or how a civilian revolver came to be carried by a Marine (or perhaps a soldier; the Army was there, too) or how it came to be lost.

James Jones, the author of From Here to Eternity, served on Guadalcanal as an Army infantryman, and wrote a novella called The Pistol, in which a private bound for combat lucks into a Model 1911 which becomes his hope of survival, his only chance to survive the sword-swinging Japanese he sees in his nightmares, and is certain he will meet for real.

I think there’s a connection between Jones’ private and this handgun. I think this Colt belonged to some E-2 or E-3 who was not authorized a sidearm, and who bought it (or was given it) as insurance. Possibly he had to keep it hidden, and maybe stuck it in a rucksack where it wouldn’t be seen, and from which it vanished.

He must have been absolutely sick when he discovered it was missing. Probably he searched for it, never realizing he had lost it wading ashore. Did he need it and not have it? I’ll never know. Did he survive the war or did he die on the ‘Canal, wondering where his Colt was?

This rusty piece of steel will never tell.