Beretta A400 Xcel: The Blue Gun

Like a lot of hunters, I’m pretty conservative when it comes to taste in shotguns. I prefer wood and blued... 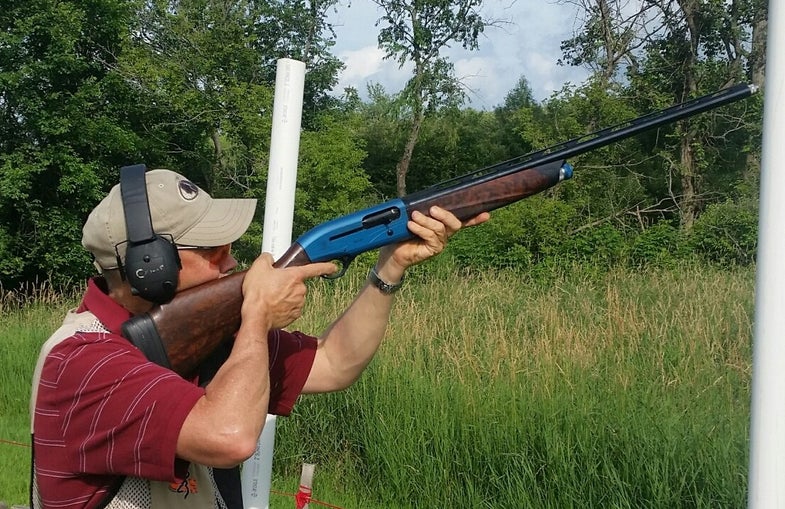 Like a lot of hunters, I’m pretty conservative when it comes to taste in shotguns. I prefer wood and blued steel. I remember the first black synthetic gun I saw, a Benelli SBE back in the 90s. I thought the plastic stock was hideous looking, but now I have four or five black shotguns because they are practical, if still hideous looking.

I don’t like camo guns much, but I do have one I hunt turkeys with. If I have to shoot a synthetic stocked gun I prefer black to camo because it seems silly to pay $1500 or more for a top-of-the line semiauto only to have the finish start wearing right away, while black guns stay black forever. Also, I have lost camo guns temporarily after leaning them against trees. And, you usually have to pay an extra $100 for camo. I’m not convinced it makes a bit of difference to a duck or a turkey if it’s shot with a camo gun or not.

All that said, now I’m thinking I might want a blue gun.

Like the taste of the old Diet Pepsi (you have to remember the 70s to know what I’m talking about), the electric blue receiver of Beretta’s A400 Xcel grows on you. It makes it easy to pick your gun out of the rack at the club, for one thing.

It doesn’t hurt, either, that the A400 is about as good as gas guns get. It shoots everything down to the very lightest 7/8 and ¾ ounce reloads. You don’t have to clean it often but it’s a snap to clean when you do, and it’s very soft shooting and extremely reliable. I have been shooting one this spring and summer and I’ve shot the field models in the past, and I really do like them. It makes my old faithful Beretta 391 seem positively obsolete.

The A400 Xcel is, I think, the first non-traditional-colored gun to break through and achieve acceptance and popularity.* I can’t help but wonder if Beretta wouldn’t sell even more of them if they had black receivers. In fact, I recently saw one that the owner had had cerakoted in black just because he couldn’t stand the blue.

On the other hand, if gun companies keep marketing guns only to people my age, pretty soon they will be out of customers. The next generation may have a different feeling about colored guns. My younger son was home for visit last week. He stepped in to my office to see what was new, stopped dead when he spotted the A400 leaning against a bookshelf and said “That’s an aggressively blue gun.”

I waited to see what he would say next.

*Back in the 60s, Browning sold the Double Automatic with a choice of black, silver, green or brown receivers. I had a black Double Auto for a while. A two-shot semiauto, it was both a lightweight terrific bird gun and a clever engineering solution in search of a problem. I wish I still had it.

Browning offered a gruesome robin’s egg blue O/U as a women’s sporting clays gun in the 90s, and Winchester had a Super X2 “Greenhead” with stock and forend dipped in emerald green that was supposed to remind you of a mallard.