Dave Miller of CZ-USA shot his way into the Guinness Book of World Records on May 16 at the Heartland... 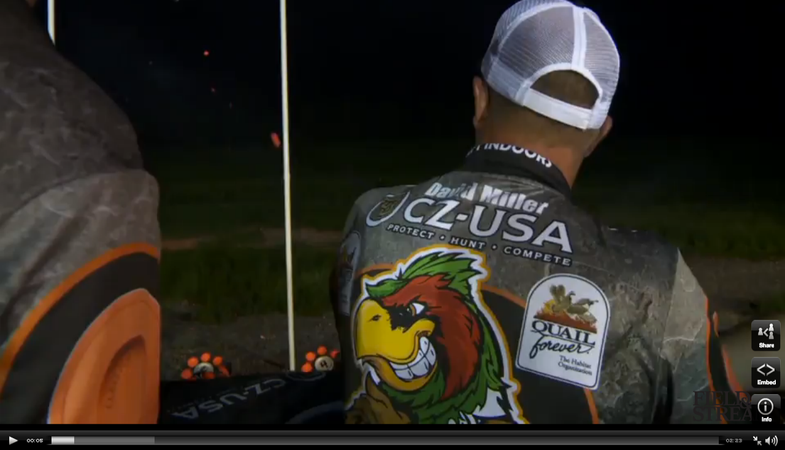 Dave Miller of CZ-USA shot his way into the Guinness Book of World Records on May 16 at the Heartland Trap and Wobble Skeet in Harrisonville, Missouri. Miller broke 3,653 clay targets in one hour. The record was verified by a Guinness representative on the spot, and the event raised $80,000 for Pheasants Forever’s “No Child Left Indoors” initiative. The Gun Nuts film crew from Wolf Creek productions was on hand to record the event, which they will make into a half hour show. They kindly sent me this short video.

I talked to Miller about the record recently. He said it began as a very simple idea when his girlfriend’s 8-year-old son suggested he do something with a shotgun to get into the Guinness book. It evolved into a complex undertaking involving 30 shotguns, 16 traps and a support crew of 24 people loading guns while Miller shot targets from the hip.

Miller says he spent most of December working on a switch to control all 16 traps so he could set them to throw clays with the right timing so he could break just over one target per second for an hour.

He also spent time in the gym working out with weights, so he could hold guns up for an hour while shooting from the hip. Miller also practiced shooting left-handed in case he needed to switch, although during the actual record try he shot right handed the whole way.

He devised leather straps you can see in the video to help him hang onto the guns. During each of four hour-long practice sessions he learned a little more. “It’s like being a boxer,” he said. “You learn where to tape up. The first time I tried it I just wore gloves and when I pulled them off the skin was gone. It was the worst rug burn you ever saw.”

Miller used 30 CZ 712 and 912 shotguns, each with its safety removed and the magazine tube fitted with a Nordic components magazine extension so it could be loaded with 16 shells. Each gun had leather straps at the grip to help Miller hold on.

During the record attempt Miller fired 4,402 shots, breaking 3,659 targets, although six were disallowed because he broke them inside the agreed-upon minimum distance of 10 meters. “I was stressed during the record attempt,” Miller says. “There was a storm coming and I was afraid we’d be caught in a downpour. During the practice sessions I took some 45-second to one-minute breaks to rest my arms but I didn’t feel like I could do that. I just kept shooting.”