Dispatches: The Finest Memoir to Come Out of the Vietnam War

Dispatches is the finest memoir to come out of the Vietnam War. It was published in 1977, and its author,... 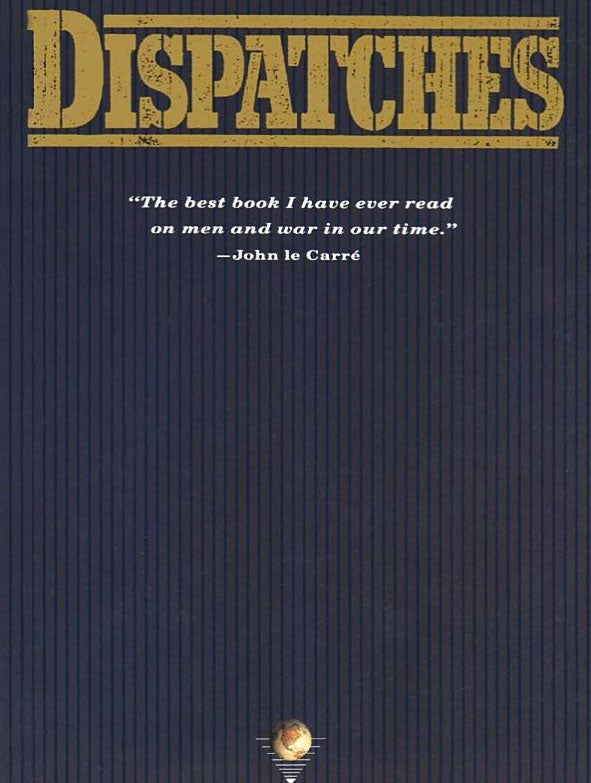 Dispatches is a trip into hell via the printed page.. Amazon.com
SHARE

Dispatches is the finest memoir to come out of the Vietnam War. It was published in 1977, and its author, Michael Herr, died in June at age 76. I think it’s fitting that we remember him, and his book, here.

Memoirs, as opposed to histories, are not chronologies of an event, but personal experiences. Since we’ve been at war almost constantly during my lifetime, and since these wars have provided a number of truly extraordinary memoirs, and since I’ve read a lot of them (No one can read them all; there are far too many.) I think it would be nice to give them some recognition. The really great ones not only tell what happened, but evoke a time and a feeling as well.

From World War II, the first on my list is Robert Leckie’s Helmet for My Pillow. Leckie was a Marine machine gunner who served until he landed on Peleliu, where his war ended. He went back to his job as a newspaper sportswriter, and one night went to see Rogers and Hammerstein’s musical South Pacific. But the glorious music and the stupid plot did not sit well with him. It infuriated Leckie that some people might think that war was actually like this, so in 1957 he wrote Helmet, and no Marine will ever write anything better. It’s full of pride and horror and humor and sorrow.

There is a scene in the book where Leckie and his platoon have graduated boot camp and leave for their next stop on the way to the meatgrinder. Leckie writes: “The trucks drove off in silence. I remember Bellow [his D.I.] watching as we pulled away, and how astonished I was to see the sadness in his eyes.”

When I read that sentence for the first time in 1957, I was 16, and was baffled by it. Today, I am no longer baffled. Robert Leckie joined those Marines who “foremost fighting fell” in 2001.

Donald Burgett was a paratrooper with the 506th Parachute Infantry Regiment of the 101st Airborne Division. Curahee, which he wrote after the war, is a very short book, and it’s highly one-dimensional. Burgett was a kid at the time, 19 years old, and did not deal in introspection. He was a highly trained killer who ignored everything but getting at the Germans and destroying them. He is not a great writer, or even a very good one, but there is nothing else like Curahee. Burgett is also, astoundingly, still alive at 91. He has no right to be.

Brave Men, by Ernie Pyle, is not a memoir; rather it is a collection of his newspaper columns from the Italian front. Pyle was an enormously popular syndicated newspaper columnist, a sad, sickly, frightened little man whose wife was on her way to the madhouse. He covered the G.I.s, not the generals, and they loved him. There is a chapter in this book entitled “The Death of Captain Waskow,” which is to newspaper reportage what Joe Rosenthal’s photograph of the flag raising on Iwo Jima is to newspaper photography. It stands alone, and it won a Pulitzer Prize at the time.

Pyle could have gone home after Italy, but he felt compelled to tell the story of the men fighting in the Pacific, and paid with his life. A sniper’s bullet killed him on Ie Shima in 1945.

Vietnam. Two stand out. A Rumor of War, by Philip Caputo, is the narrative of a Marine lieutenant who commanded a platoon in Vietnam and went from gung-ho Quantico graduate to something quite different in the space of an ugly, terrible year. Caputo’s book is distinguished by its intelligence and its awful sadness. In 1980, a television series was based on it which, for once, actually captured what the book was about.

Caputo went on after Vietnam to become a Pulitzer-Prize-winning newspaper reporter and novelist. He is still with us.

The second book is, of course, Dispatches. In 1967, Michael Herr persuaded Harold Hayes, the editor of Esquire magazine, to send him to Vietnam as a correspondent, and as Hayes said, “I bought him the airplane tickets, and gave him a Visa card, and forgot about him.”

Herr got to Vietnam in time for the siege at Ke Sanh and the Tet Offensive, and spent a year putting himself in places where the most awful carnage was going on. He wrote some unforgettable columns for Esquire, and then, having pushed his luck as far as he thought it would go, returned to the United States where he had a nervous breakdown. Dispatches is written in the New Journalism style; it is impressionistic, as befits the confused, tortured, drug-addled war it covers. It fairly reeks of fear. Terror is the theme that binds the book together. Herr’s writing is more frightening than any film.

Herr went on to co-write the script for Full Metal Jacket, and you can find bits and pieces of the book in the movie.

Dispatches is a trip into hell via the printed page, and if you have not read it, you should. Let’s hope that Michael Herr has found peace. He’s earned it.