On the one hand, the Caesar Guerini Ellipse EVO was way too nice a gun to carry into some of... 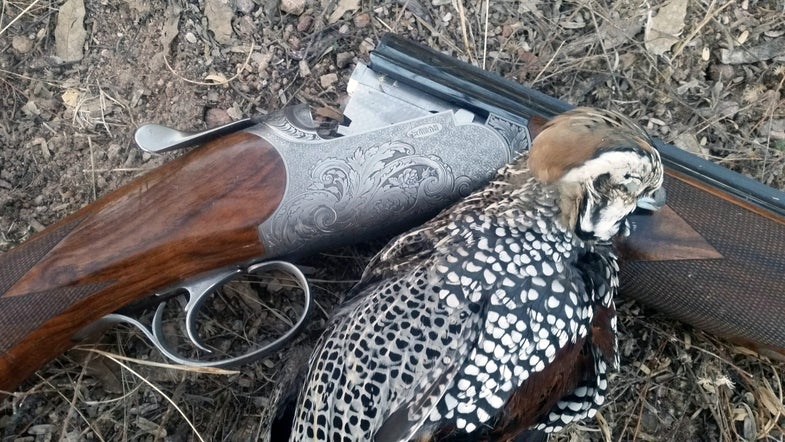 On the one hand, the Caesar Guerini Ellipse EVO was way too nice a gun to carry into some of the places I carried it last week. On the other hand, I have always believed hunting guns are made to be hunted with, no matter how nice they are. I am not one of those to say, “I would never want a gun that pretty because I’d be afraid to scratch it up.” My Mearns quail hunt Thursday and Friday put that belief to a strong test.

At SHOT I had asked the Fabarm/Guerini people if they had a gun I might shoot on my trip to Arizona. I was thinking they might send me something fairly utilitarian in a 20 gauge O/U. Instead, they loaned me an Ellipse EVO, a gorgeous gun with a $6,000 price tag.

It’s Guerini’s version of the rounded action, meaning that the bottom of the receiver is curved instead of squared off. The rounded action makes for a graceful look and a gun that carries comfortably in one hand. It has a solid rib, which gives it a pleasing, traditional appearance, and terrific wood that is finished with many coats of hand-rubbed oil. In 20 gauge with 28 inch barrels it weighs 6 ½ pounds and it’s a delight both to look at and to shoot, except when I looked at it before the trip, all I could think about was that someone had told me Mearns hunting was about like a back-country elk hunt and this was the gun I was going to carry. That the gun wasn’t mine made the situation both better and worse. I didn’t want to return it to the Guerini people in tatters.

Having never been back-country elk hunting I can’t compare it to Mearns hunting, but I will say this: we climbed up and down a lot of steep hills, hills covered with loose rock and soft dirt that gave way underfoot. There were a couple of parts of the hunt that involved rock climbing, where hands were as important as feet for getting to the top. The thought that I might fall and hurt myself never occurred to me. I was too worried about the gun. As it was, I only fell a couple of times, and the gun sustained some minor rock rash on its pretty stock but otherwise came home in one piece.

If I went back to hunt that same country again, I’d take something that didn’t need quite so much babying, and possibly the gun would have a sling that would leave both my hands free when I needed them. I’d still take something good looking, as I do believe the adage about not shooting beautiful birds with ugly guns, but there is a lot of middle ground between an ugly gun and the Ellipse EVO and I’m sure I could find something I was more comfortable dropping on rocks. But, as you can see in the picture, while the Ellipse EVO’s engraving may not have helped me get up and down hills, it certainly looked good at photo time and that matters, too.