Flash Suppressors: Getting in Over Your Head

First, a note on terminology. In the latest batch of “Ask Petzal” questions, a reader asked if “Modern Sporting Rifle”... 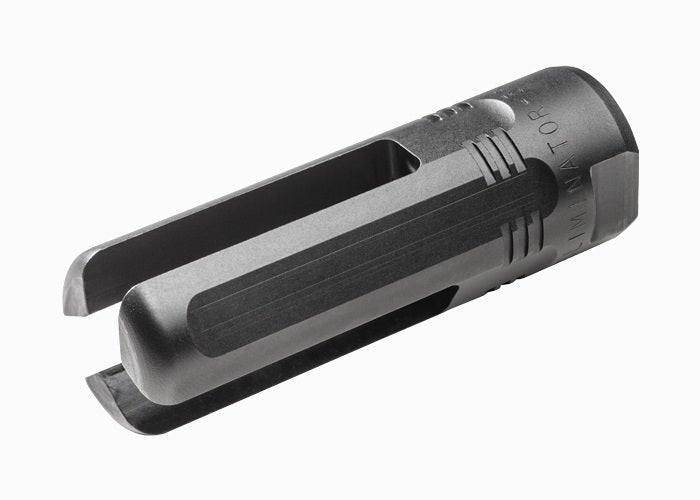 First, a note on terminology. In the latest batch of “Ask Petzal” questions, a reader asked if “Modern Sporting Rifle” was not a mealy-mouthed evasion. After all, he pointed out, a bolt-action rifle that comes off the assembly line this year is also a Modern Sporting Rifle, is it not?

Yes to both questions. So, in keeping with my tradition of writing the plain truth at any cost, I’m dropping the use of MSR in favor of Powerful Assault Rifle (PAR). This is Senator Chuck Schumer’s phrase, and the expression of loathing on his face when he says it is quite wonderful to behold. Sort of like Hillary R. Clinton when she says “server.”

But I digress. My PAR, which is a 7.62mm and has an 18-inch barrel, also has a horrendous muzzle flash with some types of ammo. It’s so pronounced that you’re left blinking like an owl in the headlights instead of aiming for the next shot.

So a flash suppressor was in order. I bought a good one, and the nice kid who waited on me was vague about the particulars, except for the price. But what could be involved? You just screw it on and off like a muzzle brake, right?

When I got the package open, I found the flash suppressor (FS), a small tube of clear glue with the catchy name of Rocksett, a directions folder, and a whole series of color-coded washers of different thicknesses. In the directions folder, it was stressed that a locator tab on the base of the FS had to end up at the Dead Center Bottom (DCB) of the barrel, at precisely 6’oclock. It did not say why. But the implications were dire.

The first step in installation was to slip a series of washers over the muzzle threads. These would give you the correct number of turns to put the stud at DCB. To help you, there was a completely incomprehensible pie chart showing all the different combinations of washer thicknesses.

When you figured out the right washer sequence, you degreased the muzzle threads and the FS threads, applied the Rocksett to either one or both sets of threads, depending on whether you read the directions or watched the tutorial, and then screwed the FS into place and tightened it with a torque wrench, which I did not have. Then you sang Kum Ba Yah and let the Rocksett cure for 24 hours.

When 24 hours had passed, I took my PAR to the range and fired 15 rounds. All appeared to be well. The rifle shot the same as before, and there was no flash that I could see. However, when I checked the FS, it had shifted clockwise from 6 o’clock to 6:35, which meant that the stud was no longer at DCB, which meant that my hair would fall out or my rifle would blow up or our planet would collide with a near-Earth object. The Rocksett had not held, and something had torqued the FS around.

I did the only thing I could. I admitted that I was over my head and called my gunsmith, who agreed to look at the whole mess if only I would stop whining at him. The difference between myself and my gunsmith is that he has years of experience working on military and military type arms, and he has tons of tools that I don’t have. He also knew what he was doing in this case, which I did not.

When he unscrewed the FS, we could see that the Rocksett had not dried properly. It had crystallized. This may have been caused by a poor degreasing job, or the stuff may have been too old, or it may have been that I forgot a verse to Kum Bah Ya.

He explained what neither the directions nor the kid in the gun store did: That Rocksett is a fearsome, and permanent, adhesive and if you use it to hold an FS in place, it’s a lifetime arrangement. The military employs it to hold flash suppressors because the FS, once installed, is considered part of the barrel, and is never coming off. The reason military contractors rely on glue instead of torque is because if you employ too much of the latter, you can actually compress the bore to the point where you lose your accuracy. So, Rocksett.

Also, if you try the installation job yourself and use whatever big monkey wrench you have instead of a torque wrench, you may find you need a new barrel, the old one having been compressed to death.

So, my gunsmith pulled the whole mess apart and degreased everything more thoroughly than I had. Because he was also unable to understand the pie chart, he picked out some new washers that gave a better alignment on DCB, and then asked me if I really wanted the FS glued in place until death did us part.

“Red Loctite,” said I, and he agreed. Red Loctite is the stronger, meaner brother of the familiar Blue Loctite. But you can reason with it.

So, everything is assembled correctly, and no permanent damage has been done. But there are some lessons to be learned from this. More and more rifles are becoming available whose muzzles are threaded for brakes, flash suppressors, or noise suppressors. Don’t rush right out and buy one of these devices without doing some research. If, for example, you get a Ruger Precision Rifle to compete in F-Class matches and screw a muzzle brake on it, you’ll discover that muzzle brakes are not allowed.

Brakes and suppressors can affect both accuracy and point of impact and, as I learned, there are all sorts of pitfalls involved in their installation. Before you go spending your money, discuss the possible side effects with a gunsmith or a shooter who has experience with the things.

I can still only speculate what happens if that locating stud is not at DCB. Would I experience the Heartbreak of Psoriasis? Would weasels rip my flesh? Hopefully, the damned stud will stay in place.