Folding knives are not new. Terminally-rusted examples have been unearthed in 2,000-year-old Roman army camps, and you can bet that... 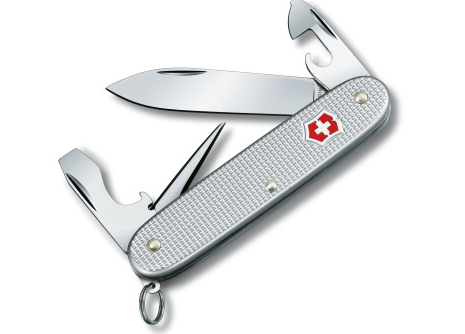 Folding knives are not new. Terminally-rusted examples have been unearthed in 2,000-year-old Roman army camps, and you can bet that the Legionaries who lost them were as pissed off as you or I would be when they turned up missing.

As a rule I prefer fixed-blade knives, but sometimes folders are better. In Africa, for example, you’re constantly getting in and out of a vehicle, and a sheath knife gets in the way. On a horseback hunt, when your stupid ½-ton nag falls on you, he may drive a sheath knife into an important part of your person. No so with a folder. Very, very few cops even glance at a big folder in a belt case. A sheath knife, however, may cause them to take an interest in you.

You get the idea. In any event, here are some folders that I recommend.

This is the minimalist Swiss Army Knife, and very close to what the Boy Scouts use. It has an aluminum handle, only four blades, and is small enough to carry in your pocket. The screwdriver blade is ideal for prying staples out of target frames, which is one reason I like it so much. Not terrific in the edge-holding department, but it resharpens in a flash, so who cares?

At the other end of the scale, the SwissChamp has 33 implements, and over the decades I’ve been carrying one, I think I’ve used every last single tool except the fish scaler. There are Swiss Army knives with GPS units, no doubt, and radar, and God knows what else, but everything on this model makes sense. I had a belt sheath made for mine, but now I carry it in my fanny pack.

A big, strong, handsome folder that came out in 1963, and may be the biggest selling folding knife ever. Too large for a pocket, so it comes with a good belt case.

Mister Reeve is South African by birth, and gives his knives Zulu names. (If you don’t speak Zulu he will come to your house and give you lessons. But I digress.) This is a mechanically sophisticated, terrifically strong knife that was introduced in 1987 and has been improved since then. It’s capable of very heavy work, and is not cheap.

Another heavy-duty knife which, in addition to being strong, is very light. The blade is Friction-Forged D2 steel, which will stay sharper, longer, than anything else I know of. Like the Sebenza, this one is pretty big for a pocket, and it will make your wallet lighter. After you use it a while you’ll forget all about how much it cost.