Getting Ready for Africa, Pt. 2

I know any number of people who’ve done a lot of hunting but have never been to Africa. They can... 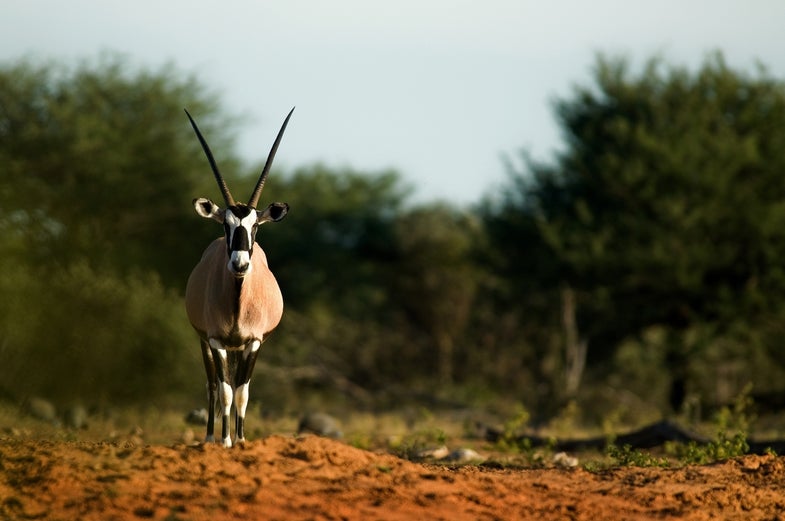 A gemsbok is one of the many plains game species that makes traveling to Africa worth the effort.. John Hafner
SHARE

I know any number of people who’ve done a lot of hunting but have never been to Africa. They can easily afford it, and when I ask them why they’ve never gone, they answer that they’re afraid to travel with guns. When I tell them that travel with guns, especially in Africa, is no more difficult than travel by air without guns, they don’t believe me. I’ve been on 11 safaris to just about all of subequatorial Africa and I’ve never had a rifle stolen, or damaged, or lost. (Read part one of this series here.)

So, if you’re looking to get ready to go, here are some rules to follow:

Four: You are allowed 5 kg of ammo, which is 11 pounds, which is plenty of ammo unless you’re a lousy shot or intend to kill the whole SCI trophy roster. Weigh it, in the container and know, to the ounce, how much you have. I use handloads, which I package in MTM transparent plastic boxes, and I pad the bullet tips with foam rubber. Then I tape the boxes shut and put them in a Cabela’s ammo carrier.

Do no get caught with loose rounds in your duffle. Big trouble. Do not save your empties. For some reason they can show up as loose rounds. Going to Zimbabwe I had 30 rounds of ammo. Coming back I had 19. I kept count, because Zim does not want you leaving your surplus rounds behind, and I was asked, so I had the answer.

Five: Select strong, heavy bullets. If you have a .30/06, use nothing lighter than 180-grain slugs. I have, for years, handloaded 200-grainers in my ’06 for Africa, and they work sensationally. There are umpteen bullets on the market, but regardless of what you’re hunting you want the tough ones. I will say flatly that the Swift A-Frame is the best expanding African bullet made. There may be something as good out there, but I can guarantee you there’s nothing better. Hornady solids have always worked perfectly, and I recommend them as well.

Six: You need a good case. In 40 years of heavy travel with guns, every case I’ve used extensively has been damaged so badly that it became unusable. This includes perhaps a dozen makes including some expensive ones. The one exception is the Pelican Storm. Mine has been across both oceans multiple times, had God knows how much domestic travel, and bears only some scuffmarks as witness. It fastens with six strong catches that you can open without breaking your fingernails and accommodates four padlocks. I use key locks, and have four Master laminated steel padlocks that work on the same key. They cost very little and are strong enough that no one has ever tried to mess with them.

Seven: Practice lots. You should work at distances from 25 yards to 200 yards, no farther. Forget single loading. From now on you work with a full magazine to make sure your rifle functions and to get you used to loading without looking, and counting shots.

Speed is everything. Acquiring the target fast and shooting fast are the currency in which you will have to deal.

Either buy or build a tripod and practice shooting off it. Learn how to hold the rifle so it does not bounce off the tripod when you fire.

If you’re shooting a big rifle, don’t go in for marathon practice sessions. Go to the range with 6 rounds, practice at 50 yards and under, and resolve to get all six in the bull. Shooting in small increments works wonders. When I started working with my .416 I wondered if I should not have committed to a smaller rifle. By the time I got to Africa the thing felt normal.

You can practice on 8-inch bull’s-eye targets, or make things more interesting by going to safaripress.com and getting their life-sized revealed anatomy African game targets. While you’re there, get The Perfect Shot booklets by Kevin Robertson, which shows you the entrails and the aiming points of both plains game and the Big Five (if you’re hunting the Big Five).

Eight: Be ready to walk.

Nine: If you have questions, ask your PH. Most of them have handheld devices and get back very fast. I asked Buzz if there were snakes in camp. He answered that they had killed the camp mamba the week before.

Ten: Smile. You’re going to experience the greatest hunting in the world.