Today’s Gunfight matches up two guns that would seem not to have much in common: a muzzleloading rifle and a... 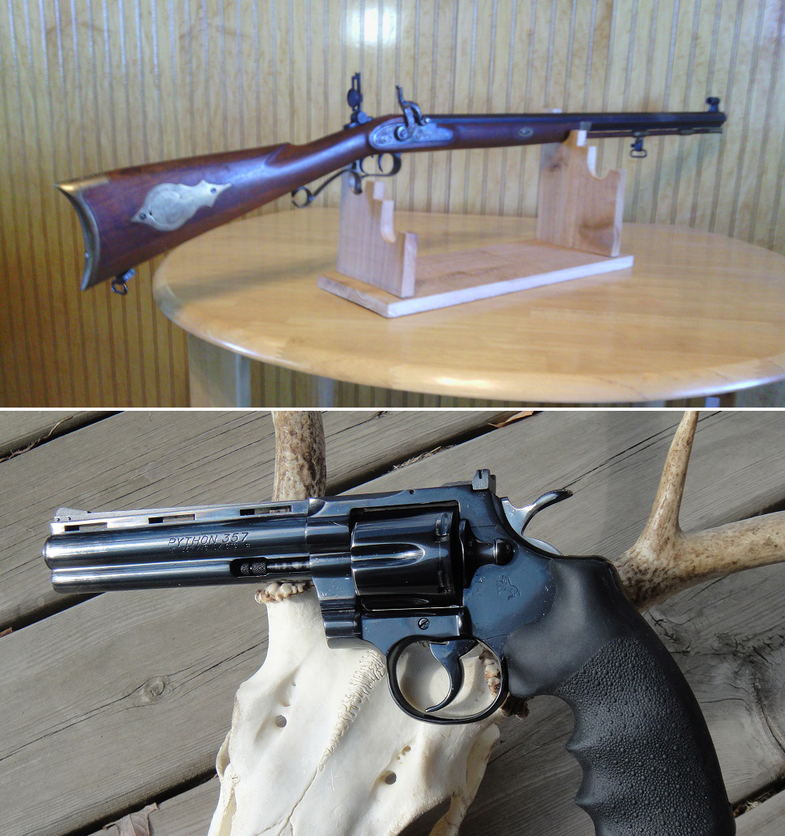 Today’s Gunfight matches up two guns that would seem not to have much in common: a muzzleloading rifle and a revolver. Both, however, are deer guns. Moreover, both both are legal where I live in the shotgun and late blackpowder deer seasons. So today you get to put yourself in my place. Pretend it’s deer season in Iowa, and you can pick either one of these to hunt with. Which do you choose, and why?

The T/C Hawken is one of the guns that kicked off the blackpowder boom in the U.S. back in the ’70s. The movie Jeremiah Johnson helped popularize the Hawken rifle of the mountain men, which was shorter, sturdier, and made in larger calibers than the graceful Kentucky and Tennessee rifles. It also happened to be an excellent whitetail rifle. Before in­lines came along, the T/C Hawken was the gun of serious blackpowder deer hunters.

The Python was Colt’s top-­of-­the-­line revolver, made from 1955 to 1999. It’s recognizable by its vent rib. It was chambered in .357 magnum and popular among law enforcement officers and hunters. At the time, the .357 was hot stuff as a hunting load, but now it’s seen by some as marginal for whitetails.

Here’s what the owners of these two guns have to say about them:

This is “Little Hickey.” It’s a T/C Hawken in .50 cal. I bought it at Carter’s Country in Spring Texas in 1973. The globe front sight and Vernier tang sight are T/C after market additions. I was finally able to lob Maxi balls into an 8­inch paper plate at 250 yards with some regularity. It’s taken several whitetails and the odd varmint. Ninety grains of powder is about all that brass butt plate allows me to shoot.

This is a Python from 1969. It’s an E series my dad bought used in 1972 if I remember right. He killed a lot of chucks with it, and I shot it quite a bit growing up. It went to the Colt Custom Shop around 1980 for a trigger job. Dad gave it to me for my birthday a few years back. I popped a coyote with it, then shot the small 8­point whose rack the Python sits on in the picture. I put Hogue grips on it because all my handguns wear them. I kept the original grips along with the box and papers. The gun has some holster wear, which might offend some folk, but I am not a collector, I am a user. I got caught with it once in a heavy rain and did a complete teardown to make sure nothing bad happened. It’s my sunny-day hunting gun now.

There are your choices. Suppose you had one of those big bucks Iowa is famous for wandering by your stand. Which of these two guns would you want in your hands? Vote, comment below, and keep the gun pictures coming to fsgunnuts@gmail.com.