Today we’ve got a pair of rifles made for carrying in rough terrain, lightweights that you will hardly notice riding... 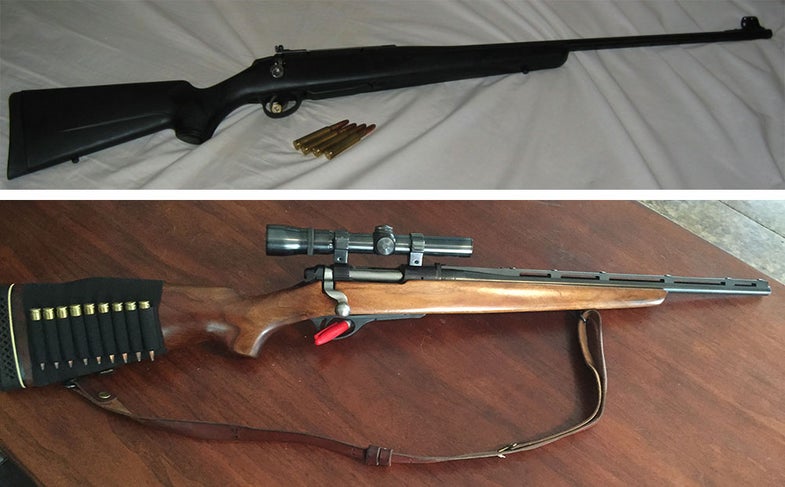 It's the Tikka T3 (top) vs the Remington Model 600. Reader Submitted
SHARE

Today we’ve got a pair of rifles made for carrying in rough terrain, lightweights that you will hardly notice riding on your shoulder until time comes to make the shot.

The Remington 600 was made from 1964 to 1968, a short-barreled, light rifle that is instantly recognizable by its – correct me if I’m wrong – completely non-functional nylon ventilated rib. The 600 was replaced by the similar, but ribless, 660, then the Mowhawk 600. The Tikka T3 is currently manufactured by Sako in Finland.

I will try again, not sure if you accept pictures from Canadians. Here is my Tikka T3 with Skinner receiver sight in .338 WM. It weighs 6.6lbs loaded, I load it with 300-grain Woodleighs. This combo is not for the faint of heart; but I believe it is more than capable of taking ANY game in Canada within a reasonable distance.

I saw this rifle on the rack of the local gun store and thought it looked pretty neat, but I knew nothing about it. I read good things about it on the net but also learned about the trigger/safety recall. After I showed the owner of the store how the rifle would fire if you pulled the trigger with the safety on, then took the safety off and touched the bolt handle, he wanted to get rid of it and I got a heck of a deal. Remington fixed the safety problem for me, and now the Model 600 is a heck of a shooter and fills the gap in my woods rifles between my ghost-ring sighted Model 94 and my Model 700 in .30-06.

My 600 is a .308 with a Pachmayr Decelerator pad, a Weaver V4.5 scope and some odd Bushnell universal scope mounts. It feels like the gun was set up this way not long after the rifle was originally purchased, and it just plain works.

There are your choices. This is the second time around for Andy’s rifle. He recently sent me a new, better picture than the one we originally ran a year or more ago, and I am rewarding his effort. And yes, we do take pictures from Canadians. Gun Fight Friday can’t afford to discriminate against anyone, even if we wanted to. We always need gun pictures, and we’re not turning them away at the border. Vote, comment below, and send your pictures to fsgunnuts@gmail.com

Vote for your favorite rifle.