Today’s Gun Fight is a battle of Browning rifles with initials for names. The BLR was designed in part by... 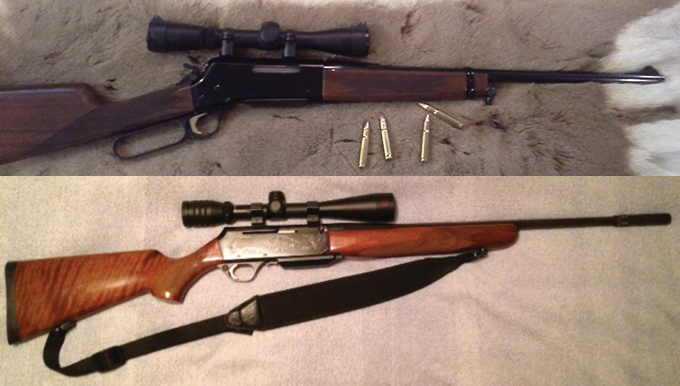 Today’s Gun Fight is a battle of Browning rifles with initials for names. The BLR was designed in part by Bruce Browning, John Browning’s grandson. It debuted in 1969, offering a lever action with a box magazine that could accommodate pointed bullets and an action that could withstand cartridges as powerful as the 7mm magnum. The gas operated BAR came out in 1967 and has been made in calibers from .243 to .338 Win Mag. This one has a BOSS (Ballistic Optimizing Shooting System) on the muzzle, an innovation of the 90s that is designed to let you tune the rifle’s vibrations to particular loads to improve accuracy. (You rifle-shooting readers will have to tell me how well it works).

Here’s the newest member of the family: a BLR 81 Lightweight in .358 Winchester. I am a nut for the medium velocity medium bores. When I saw this one on the used rack I had to have it. It’s such a light and handy little rifle with a slick action. Once I find a 225 gr handload it likes I plan on taking it after elk in the timber, although I have faith in its ability to take elk out to 300 yards if I have to. The scope is a 2-7x Nikon. The .358Winchester is a great cartridge and I’m saddened Winchester decided to stop producing ammo for it, but Hornady is breathing life back into it. Probably more like they’re keeping it on life support, which is a shame.

This is my Browning Bar! I love this gun! I bought the gun used 10 years ago and have hunted deer, hogs, coyotes, and the occasional bobcat every season. After zeroing the BOSS to good ole 150 grain Remington Core Lokts I can get 1 ½-inch groups all day long! I just changed the scope to a Redfield 4×12 I am ready to put some meat in the freezer this season!

There are your choices. Have at it. Vote and comment below, and keep those gun photos coming to fsgunnuts@gmail.com. Send horizontal pictures, please, as those work best on the site.