Today’s Gun Fight pits two great deals against each another. Both of these rifles were steals for their owners. One... 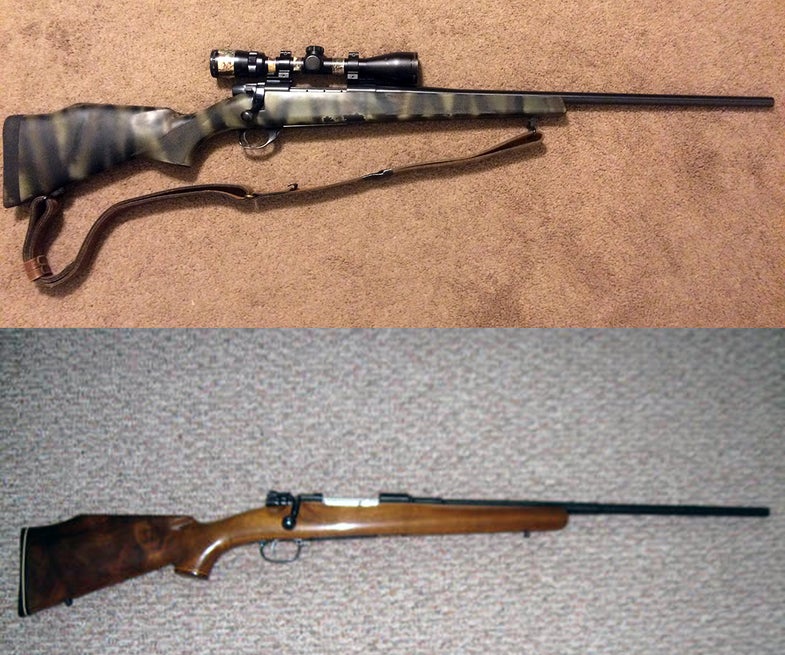 Today’s Gun Fight pits two great deals against each another. Both of these rifles were steals for their owners. One found his rifle at a pawn shop, the other did an excellent piece of gun trading for his. Both are bolt actions chambered for classic cartridges, one in .270 Winchester, the other in 7×57 Mauser. Either round is a versatile choice and an excellent deer cartridge, with the .270 having the edge at longer range due to its flatter trajectory.

This is my Weatherby Vanguard in .270 Winchester. It’s my first deer rifle. I was from a shotgun only-state until I moved to Arkansas where I lucked out and traded a Mossberg shotgun even up for the Weatherby. It was brand new (I’m responsible for the paint job) and it was the rifle I used to take the two biggest deer of my life, both B&C bucks two years in a row. I keep thinking I want a new rifle but I just can’t make myself replace it. The Weatherby will be passed down to one of my grandsons. It wears a cheap scope right now but I think since I’m going t keep it it’s time to upgrade the glass. I’ll tell my wife that costs less than buying a new rifle. Bottom line: great rifle, a little heavy, but it’s fine. I shoot it okay but that’s because the rifle is accurate and I’m not. It’s getting a little worn and ugly like me so we are a great pair.

Class this under “pawn shop deals.” It’s a 1908 DWM Mauser in 7×57. The barrel has been nicely cut down and it has a new bolt handle. It’s got good blueing, a jeweled bolt and a Brownell’s safety. It also has one of the better do-it-yourself stocks that I’ve seen. Included was a case, sling and swivels, and a 4×40 Bushnell scope all for $250.00 Beat that if you can. And, this was two years ago, not last century. I always wanted a 7×57 and could not pass it up. I just had to hunt with it and it cost me the biggest buck I’ve ever had a shot at. Did you know the safety is not the same as a Remington 700 safety?

There are your choices. Even I, with my strong shotgun bias, think Joshua made a great trade for his Weatherby. Does that beat a $250 Mauser? Tough call. That is up to all you to decide. Vote and comment below, and keep the gun pictures coming to fsgunnuts@gmail.com

Which Gun Do You Prefer?