It’s a match gun, well, matchup today, with two heavily doctored 1911s facing off. It would be better if we... 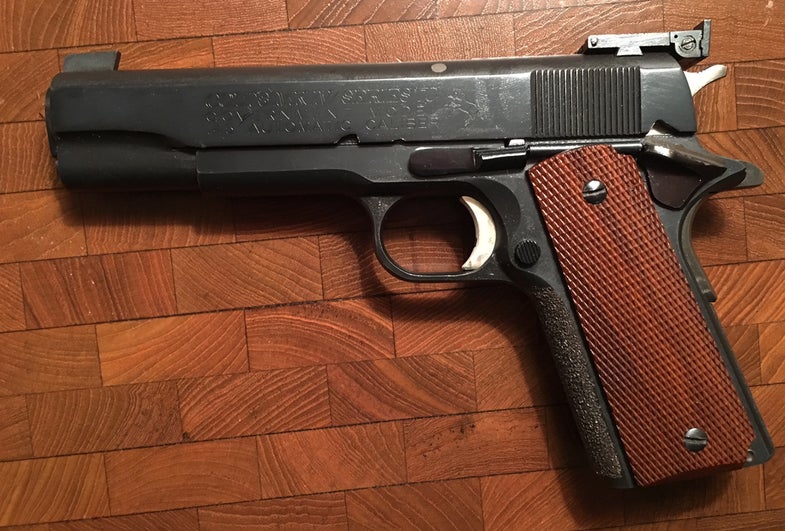 "If you put this one in a vise, she'll place five wadcutters through a single hole at 100 yards.". Reader Submitted
SHARE

It’s a match gun, well, matchup today, with two heavily doctored 1911s facing off. It would be better if we could have an actual shootout to see which is the more accurate pistol, but we’re going to have to take their owner’s word and look at the photos instead. I could waste digital ink here introducing the 1911, but you all know more about John Browning’s .45-caliber semiauto than I do. So let’s get to the gunfight.

This is a picture of my late father’s M1911 Colt Series ’70, which was developed by John M. Browning. The original model was adopted for military use in 1912 and remains unsurpassed in overall reliability and performance. This particular pistol came to life in the 1970s and, with the exception of the sights, looks just like all the other 1911s you’ll find at Cabela’s. But, if you put this one in a vise, she’ll place five wadcutters through a single hole at 100 yards.

As a young Air Force captain in the 1960s, my old man was first assigned to Randolph AFB in San Antonio, Texas, soon after General Curtis LeMay opened the doors of the USAF Marksmanship School, in an effort to dethrone the Army from the upper echelons of competitive shooting. At that time, there was a substantial recruiting campaign for the base pistol team, which drew the interest of my father, and he began shooting competitively for the Air Force. After a few years, Dad purchased this M1911 and proceeded to find a pistolsmith to have it accurized. In his quest for the perfect sidearm, he went so far as to call the home of Army pistol champion Bill Blankenship, whom he did not know, for advice. Blankenship wasn’t home, but his wife was, and she told Dad the name of the man that accurized Bill’s pistols at Fort Benning. Off to Georgia the pistol went.

I’ve never shot anything else that can perform quite like she can. I’ve tried to research the pistolsmith that worked on the gun, but the DoD prohibited its pistolsmiths from marking their work. I guess I’ll just have to call Mr. Blankenship.*

This pistol started life as a stock Kimber Custom II. It was my first 1911, and I wanted to use it as my IDPA gun, so it has been completely gutted. Almost everything has been replaced, mostly with Wilson Combat components, including the threaded match barrel. I made the cocobolo grips myself one weekend when I was bored, and a buddy milled the dimples for me. It’s all done except for a cerakoting, which it will get next week.

There are your choices: Colt vs. Kimber, and the work of a skilled Army armorer vs. Wilson Combat’s finest. Vote and comment below, and keep the gun photos coming to fsgunnuts@gmail.com