Today’s gunfight pits a couple of general-purpose revolvers against one another. Both are .38s. One is chambered for the old... 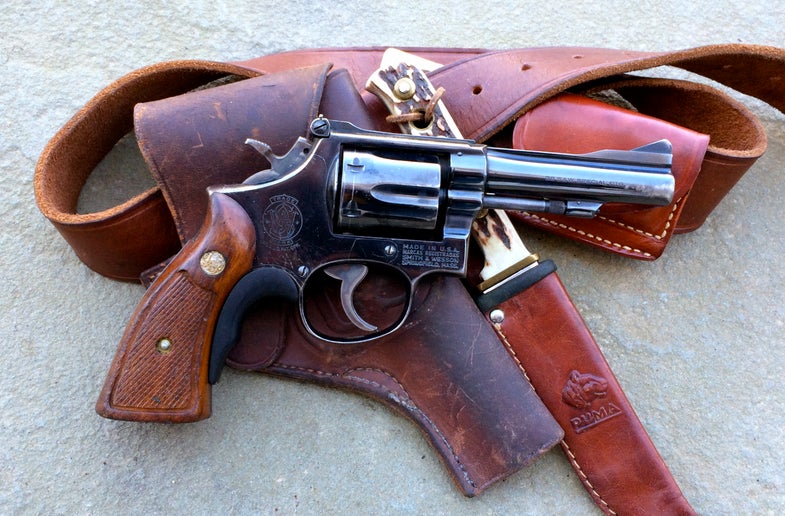 Today’s gunfight pits a couple of general-purpose revolvers against one another. Both are .38s. One is chambered for the old .38 S&W, which dates back to 1877. The other is for the ever-popular .38 Special. Both of the guns’ owners had a lot to say, and they were both so entertaining I’m printing their stories in full. Both also sent excellent pictures, I should note, too.

This is my beater, an old S&W Model 15 revolver in .38 Special. Perhaps most of us have one or two underappreciated handguns like it. This revolver came from one of the super-sized Tulsa gun shows back in the mid-80s, shortly after the Air Force sentenced me to a year in nearby Enid. I fished it out of a very large cardboard box filled with with Model 15s. The dealer said they were police trade-ins, if I recall correctly, from somewhere in up in Minnesota. There were several boxes with hundreds of revolvers, nearly all Model 10s and Model 15s. It seems this was a period of time when many departments were transitioning to autoloaders, so they were giving these away at about $100 each. For slightly more you could get a better grade. I don’t have any great affection for DA revolvers. Indeed I’m mostly a 1911 guy and absolutely go weak for a nice old Colt single action. Yet this revolver has spent more time strapped to my side that all others combined, a regular accessory while cutting brush, mowing, scouting, or taking part in other outdoor activities. Shamefully I admit that it gets a thorough cleaning only about once every decade or so, but it doesn’t seem to care. So my hat is off to Smith & Wesson for producing this superbly accurate revolver that seems so nearly indestructible.

Grandpa John was a truck driving man—the kind they wrote songs about. From Texas to Minnesota, from the Big Apple to Shakey Town, Grandpa John steered his Peterbilt over millions of miles and decades. If you enjoy a certain name brand of pork product, chances are you had Grandpa John to thank for it. Not only that, but his smile and generosity was legendary on the highways. He often gave away nearly half his annual salary, and countless fuel-stop workers, waitresses, and mechanics had extra at Christmas because of John.

It’s no great surprise that a man driving that many miles choose to live so far off the paved path. Directions to Grandpa John’s house included: “When you come to the dogleg, turn down the gravel drive.” The nearest neighbor was half a mile away, and Grandpa John liked it that way.

Although his hobbies were classic cars and taking care of stray cats, Grandpa John wanted to be prepared. Varmints and nuisances of four-legged varieties were dispatched with a single-shot 12 gauge. For nuisances of a two-legged variety, Grandpa John had this Hopkins and Allen Forehand Model 1901 in 38 S&W. He never had to use it, but once a year he would take it out for some practice, and it remains surprisingly accurate and crisp. The break top still locks tight in place, and is kind of cool nostalgia.
Grandpa John left this world, and this gun is now in a different home. It isn’t a typical standard collector’s item, but it is an heirloom for us. It looks a little out of place next to our more modern sporting and defense firearms. Yet, it is still kind of a classic—simple, no frills and effective—just like Grandpa John.

There are your choices. Vote and comment below, and keep the gun pictures coming to fsgunnuts@gmail.com.