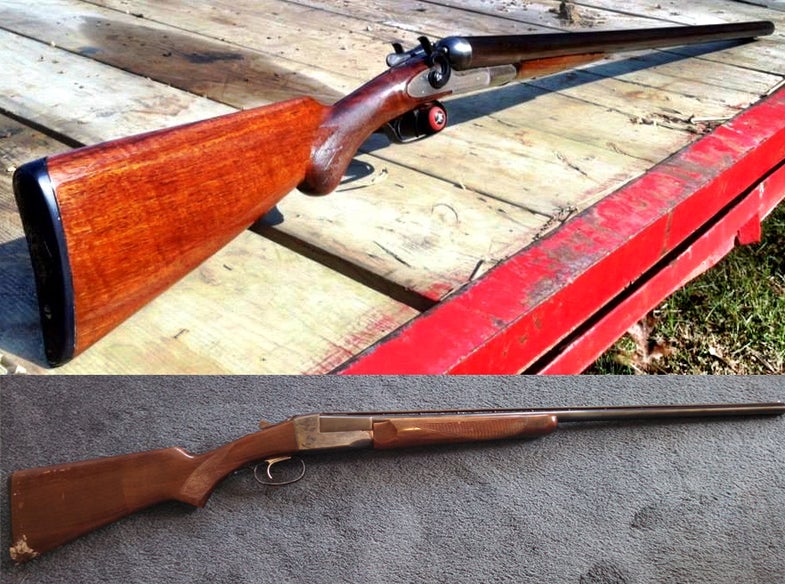 For this week’s Gunfight Friday, we’ve got a shotgun mismatch: a .410 and a 121-year old 10 gauge. Both of these doubles get out into the field on special occasions. At least one of them will be in the dove field on September 1.

The J.C. Higgins 101.540 was the Fox Model B double made for J.C. Higgins, the Sears house label. Incidentally, J.C. Higgins was a real person. He worked in the Sears accounting office for 32 years, retiring in 1930 as company comptroller. His name was chosen for the sporting goods brand, I guess, because Sears liked the ring of it. Higgins had no middle name. The “C” was made up.

The Model 1889 Remington was made through 1908 in 10, 12, and 16 gauges. In the 19th century, 10 gauges were quite popular and not just for waterfowl. The typical 10-gauge load was just 1 ¼ ounces of shot. The higher-grade guns had Damascus barrels, while Grade I guns had barrels made of “decarbonized steel,” which is a confusing name, since all steel has carbon in it. The term refers to the Bessemer steel making process.

Enough firearms trivia. Here’s what the owners have to say about their guns:

This shotgun is a 10-gauge Remington model 1889 made in 1893. The 1889 was the last of the Remington hammer guns. The stock was broken in half from head to toe. I repaired the stock and rust-blued the barrel in my spare time. A good friend took the old Remington back into the rabbit fields last year. The ole girl still shoots straight.

This J.C. Higgins model 101.540 was my grandfather’s gun. When my uncle moved he shipped it to me as a surprise gift. It is .410 bore and definitely one of the sweetest shooting .410 doubles I have shot. It has some signs of use including a little mud from the 2013 dove opener on the stock. It is also just as lethal on rabbits, squirrels, and clays. Plus it puts a smile on everyone’s face when I pull it out to shoot!

There’s your matchup: an ancient 10 that can still roll a rabbit or an heirloom .410. Vote, post your comments, and keep the gun pictures coming. I could still use a picture of a pronghorn rifle, or anything else you want to send to fsgunnuts@gmail.com.