In the old West, your long gun and your revolver were often of the same caliber, and short, handy carbines... 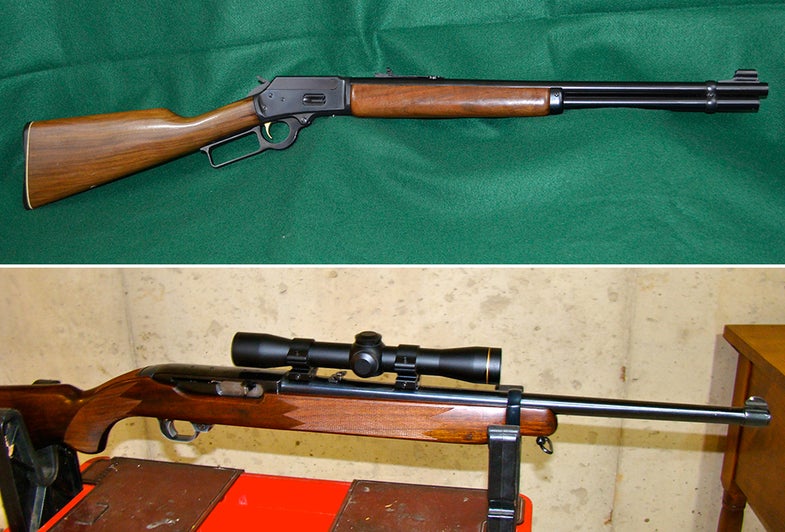 In the old West, your long gun and your revolver were often of the same caliber, and short, handy carbines were a favorite saddle gun. Only a few of us still need a saddle gun anymore, but many people still enjoy shooting and hunting with carbine-type rifles. We’ve got two today—both chambered for the .44 magnum. One is a semiauto Ruger, the other, a lever-action Marlin. Ruger made the 44 Carbine in a few different styles between 1959 and 1985, all of which had a four-round rotary magazine. Marlin has been making the 1894 since, well, 1894, but the .44 magnum version dates to 1969.

Forty-four-magnum ammunition runs through a carbine-length barrel that achieves velocities 400-500 fps., which is faster than you get from a typical revolver. That increase in speed doubles bullet energy and makes the .44 magnum an effective 100-yard deer cartridge in a carbine.

My wife bought this for me for my first birthday back from an overseas tour. It hasn’t seen any sporting use, but I used it a lot as a truck rifle on my father-in-law’s ranch. We had a problem with feral dogs. It is on the top of the list to use on a mountain lion hunt I’m considering. It has a 10-round capacity, no hammer safety, and Micro-Groove rifling. I know the rifling is debatable, but I’ve never had a problem. It’s a very light, handy rifle.

I purchased this mid-60s vintage rifle about 12 years ago while living in Louisiana, aiming to put together a lightweight, fast-handling rifle for hogs and deer. At the time, intermediate eye relief scopes were all the rage, so I found a local gunsmith to fit a pair of lightweight bases to the barrel. It works well while confined to a treestand, especially when shots are required from awkward positions. Young shooters also do well with the rifle, perhaps because of the relative ease in finding and lining up the crosshairs despite a long (for them) length of pull. The light recoil helps, too. Not much else to say, except that the .44 magnum cartridge fired from a rifle barrel is a real thumper. My chronograph shows velocities averaging 1680 fps with premium 250-grain factory loads, a significant boost over .44 revolver speeds. Accuracy at 100 yards is about what you might expect from a short carbine, hovering around 3 to 4 inches, which is certainly adequate for close-in shooting. What a shame that this rifle is no longer offered. Thankfully they aren’t too hard to find—for now anyway.

Thanks to frequent contributors Tim and Tee-Bone for these two rifles. Vote, comment below, and please keep the gun pictures coming to fsgunnuts@gmail.com.