Turkey seasons open in the South this month—and in very few days in some places—so today we’ve got a Remington... 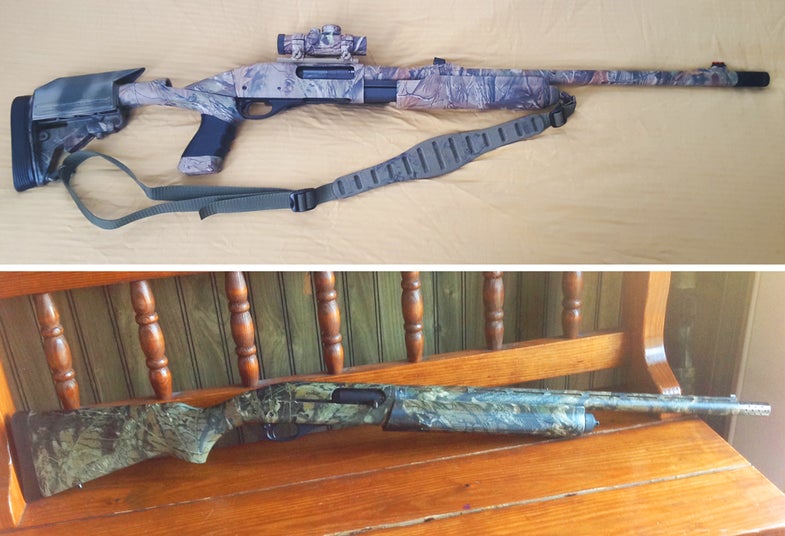 Turkey seasons open in the South this month—and in very few days in some places—so today we’ve got a Remington turkey-gun shootout. If there is such a thing as a classic turkey gun, the 870 is probably it, with the 1100/11-87 not far behind. Today’s examples are thoroughly modern, camoed-up versions—one a gas semiauto that can absorb turkey-load recoil, the other a “tactical turkey” pump gun.

This is my 11/87 turkey. It has never let me down and taken every bird I’ve shot at it with. I have four different extended chokes, so I buy whichever 3-inch, 2-oz. load is on sale and see which choke shoots it the best. For turkey season, I add fiber-optic open sights that I then take off and replace with the bead once the season is over.

This is my Remington 870 Super Mag Max Gobbler 3½-inch 12 gauge. I picked it up from a clearance rack at a sporting-goods store going out of business. It’s probably the only deal I’ve ever gotten on a firearm. I’ve shot four spring gobblers with it, so I feel like it has good mojo.

It came with an adjustable, spring-loaded, recoil-reducing stock, to which I added the cheek piece and a Hogue grip sleeve. It had a shell carrier on the cheek piece, but it was a little too tactical and made the gun difficult to shoot with from either shoulder, so I ground it off. I had the trigger pull lightened and the bore polished, too. I have two Indian Creek choke tubes for it, so it shoots a very tight turkey load or buckshot for coyotes. Finally, I added the red dot, so I can keep the bird’s whole head in view while I squeeze the trigger.

_I’m sure there will be negative comments about the modern look of the stock, but it’s great because I can change the length of pull on the go, and it really soaks up recoil, especially with 3-inch shells. Another big plus is that the pistol grip keeps my wrist at a comfortable angle while I wait motionless. I shoot 3½-inch Hevi Shot 6 out of it, which I call the “wall of lead”. I know, I know—I don’t need that much gun to kill a turkey, but when I drive three hours across the state to visit my uncle’s farm in Pennsylvania for the first day of the season, I don’t really care. _

Personally, I like the idea of having four choke tubes to see which shoots sale ammo the best, although at the rate I go through turkey loads, I’m not sure it would save me much money. Nevertheless, these are two good choices: a 3-inch semiauto or a 3½-inch pump. Vote and comment below. Thanks to all of you who submitted guns recently. I appreciate it, and there is always room for more gun pictures. Send them to fsgunnuts@gmail.com