Today we’ve got two air guns, although it’s not an apples-to-apples fight. Both guns cock with a single stroke, but... 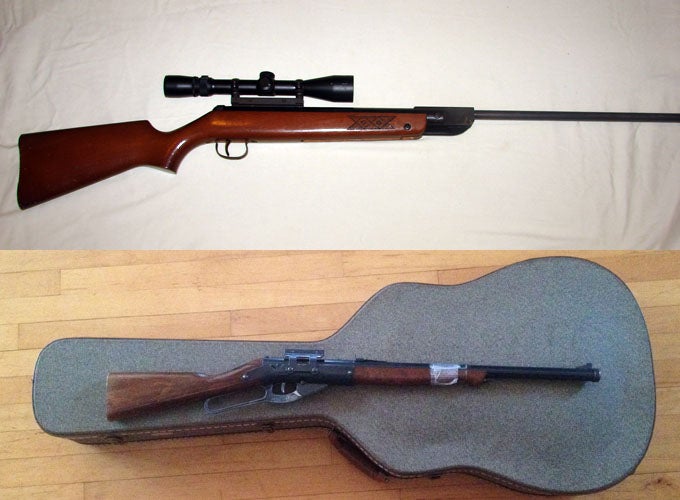 Today we’ve got two air guns, although it’s not an apples-to-apples fight. Both guns cock with a single stroke, but the similarity between them ends there. The RWS 34 is what they call an “adult air gun.” It’s a serious, accurate, and deadly rifle that shoots .177 lead pellets at 1,000 fps. The Daisy 95 is a slightly longer gun than the famous Red Ryder and intended for young shooters. It fires a steel BB at about 300 fps.

Despite the difference in power and accuracy, these air guns share one important trait: both have been shot thousands upon thousands of times by their owners, which is one reason air guns are so beloved by people who own them.

I guess you can call this a gun. It has caused the death of more animals than all of my other shotguns or rifles put together. It is a pellet rifle, an RWS Model 34 that was made in 1992. It is still in perfect working order and has dispatched thousands of blackbirds, starlings, crows, squirrels, sparrows, and other varmints. My son shot and killed a possum that would not leave our front porch this winter and was fighting the dogs. It shoots 1,000 fps and groups under a half-inch at 35 yards. It is a German killing machine. I never expected it to last 30 years. I bought it for $169 and they are about $100 more than that now. It wears a decent Weaver Japanese scope that was $150 and a hand-carved stock courtesy of one of the wood burning kits I got one of the kids about 199. I still shoot it daily, as the crows have taken to eating my dog’s food.

This is the Daisy Model 95 BB gun that I received for Christmas from my parents in 1963. It is directly responsible for turning me into a Gun Nut. Dad’s intent was for me to trim the population of starlings, english sparrows, and barn pigeons that plagued the farm, and I was all too eager to comply. While neither real powerful nor accurate, this was the Kalashnikov of air guns. It held several hundred BBs, and I could carpet bomb a target while my cousins and friends fussed with loading or pumping up their fancier guns. Along with the thousands of BBs I have fired through this, I have thousands of memories associated with this, my first gun. It is now worn and battered, but fully functional after surviving the hands of my kids. Kind of like me.

There you have it. Doug’s gun may be underpowered in this fight but it does come with a guitar case as a cool accessory. The Teutonic deadliness of Dr. Ralph’s rifle is nicely softened by the homemade wood-burner checkering pattern on the stock. Both guns are treasured by their owners. Which do you vote for? And add your comments, too. Send your gun pictures to fsgunnuts@gmail.com because I am running out of gunfight inventory.