Time for an army surplus Gunfight: We have two salty rifles today—one likely a veteran of the Eastern Front; the... 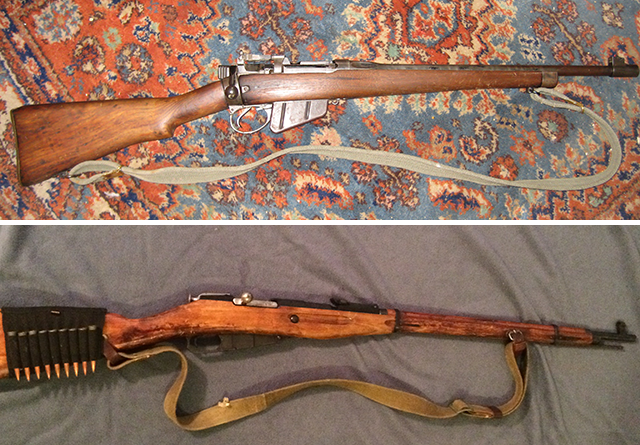 Time for an army surplus Gunfight: We have two salty rifles today—one likely a veteran of the Eastern Front; the other made too late for WWII but in time for service in Great Britain’s post-war colonial conflicts.

First, the SMLE (Short Magazine Lee-Enfield or “Smelly”) No. 5 Mk. It was a compact version of the SMLE battle rifle with its barrel shortened to around 19 inches, developed during WWII for use by airborne soldiers. It was commonly known as the “jungle carbine” because of its service in the Malayan Emergency. It’s chambered for the .303 British, a cartridge which has been fought with and hunted with around the world.

The Mosin Nagant needs no introduction these days. Over 37 million were made, and every gun store seems to have a barrel full of surplus Mosin-Nagants on hand. Developed at the end of the19th century, the Mosin served in both World Wars and many, many others. Today it is widely available and popular as an inexpensive hunting and target-shooting rifle. The 7.62x54r cartridge remains in service with the Russian military today and is a popular hunting cartridge in some places.

Here is my SMLE Lee Enfield, No.1 Mk5, a very accurate well made military rifle developed by Great Britain and used throughout the British Empire. Some say it is arguably the best military weapon of its time. The SMLE has the highest rate of fire of any bolt action, higher than the Mauser 98 or Springfield 03. My rifle has had the flash hider and bayonet lug cut off. I reload for it and enjoy shooting 180-grain loads up to 300 yards with the rear ladder sight.

This is my Mosin Nagant, chambered in 7.62x54r, made in 1942. I have reason to believe that it may actually have been used by a Soviet soldier, as there are notches underneath the metal butt plate. I picked it up last year. As of yet, all I have really been able to do with it is beat down a rambunctious coyote that spoiled a bear stalk. It shoots a clean 100-yard group, although it is pretty picky when it comes to which ammo it prefers.
Take your pick, vote and comment below, and keep the gun pictures coming to fsgunnuts@gmail.com.