We’ll get 2015’s gun fights off on the right foot with…shotguns! What else were you expecting from me? In particular,... 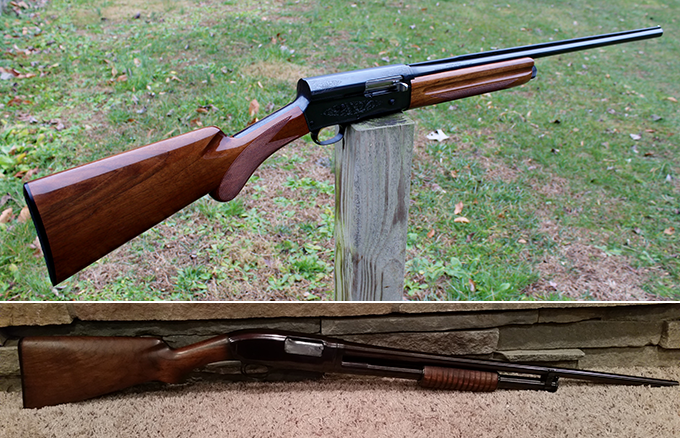 We’ll get 2015’s gun fights off on the right foot with…shotguns! What else were you expecting from me? In particular, we’ve got a pair of 20 gauge classics this week, one pump and one semiauto. Neither needs much introduction.

The Browning Auto 5 was the first semiautomatic shotgun and a gun ridiculously far ahead of its time. In 1898 John Browning designed the gun, which worked on the long-recoil principle, meaning the bolt and the whole barrel moved back about three inches under recoil. The Auto 5 was made in Belgium, the U.S. for a short time during World War II, and at the Miroku plant in Japan from 1975 until the gun was discontinued in 1998.

Winchester’s Model 12 replaced another Browning-designed gun, the Model 1897 Winchester, but it was everything the 97 was not: hammerless, slick and streamlined. The Model 12 earned the nickname “the Perfect Repeater” and for years it was the last word in pump guns. It has been used for everything from quail hunting to clearing trenches. The Model 12 was produced from 1912 to 1964, then made in special production runs into this century. Incidentally the first Model 12s were 20 gauges, with 16s and 12s added to the line afterwards.

We’ve got fine examples of each today. Here they are:

This is my Browning A5 Light Twenty (2 ¾ inch) I recently traded for. I have several 12 gauges but after the birth of my son, Jackson, I realized I will need a few sub gauges for the boy when he gets a little older. I hope he will enjoy this little A5 as much as I do. It is of Mirouku manufacture so it has choke tubes.I have already bought a turkey choke for next spring. The older I get the more I am attracted to the sub gauges.

Thisis my 20 gauge Winchester Model 12. I picked it up at Cabela’s for a song and a couple of gift cards several years ago. It rolled out of the factory in 1913 with a full choke and a 2 ½-inch chamber. I never had any intention to hunt with it, I just wanted to have a product of America’s golden age of manufacturing. A few years back i was struck with the desire to take it out after dove. I bought some 2 ½-inch Gamebore cartridges for it and went hunting. When I connected it was like turning off a light switch. I’d like to think that somewhere in heaven the guy who put her together was smiling.

There are your choices: a vintage Model 12, or a more modern, and more practical Auto 5. For what it’s worth, I have not been to the Winchester plant circa 1913, but I have been to the Miroku plant in Japan and been impressed with the amount of skilled hand work that goes into every gun. Also congratulations to Andrew on the birth of his son and the realization that having kids is a great excuse to buy more guns, and congratulations to Adam for taking a 100 year old classic back into the field where it belongs.

Vote and comment below, and keep the gun pictures coming so Gun Fight Friday can have a great 2015.