Today we have a semiautomatic showdown between two storied brands: Browning and Remington, the BAR and the Model 740. It’s... 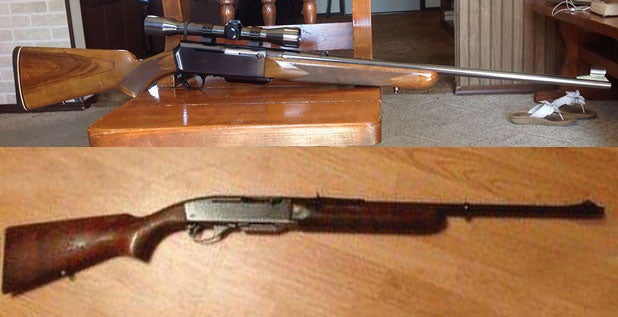 Today we have a semiautomatic showdown between two storied brands: Browning and Remington, the BAR and the Model 740. It’s also a 7mm Magnum vs .30-06 fight. The BAR, a gas gun, was designed by John Browning’s grandson, Bruce Warren Browning, and debuted in 1967. It has been made in several variants in many standard and magnum calibers in grades I–V, and a Safari grade. The Remington 740 debuted in 1955 and was replaced by an updated version, the 742, in 1960. The 742 begat the redesigned 7400, which begat the 750 in 2006. The 740 was made in several grades and calibers, but not in a magnum.

This is my first rifle, which I got Christmas of 1974. It’s chambered in 7mm Rem mag. Back when the word magnum raised testosterone levels and hunting with one brought jealous looks from schoolmates. I wanted a 3×9 Redfield W__idefield to put on it but couldn’t afford it. I was showing the gun to my grandpa (even though he and Dad were with me when I got it, of course) when he went and took down his 300 Savage and gave me the scope and rings off of it. He said he only hunted the shotgun zone now anyway. It was in the old weaver hook-style rings, so all I had to do was get bases for a couple bucks. It’s a 4X weaver wide angle, and though I was kidded about it when I moved to Colorado, it never left me wanting. I know 7magnums, fixed powers, and semiautos that can’t make 1 1/2-inch groups have fallen back into popularity, but this rifle is a bonafide killer.

This my father’s old Remington 740 in .30-06. The manufacture date of the rifle is 1956. Dad purchased the gun second-hand in 1973 after the first owner shot the rifling out by running hundreds and hundreds of rounds of military hard-ball ammo through it. The gun was re-barreled, and for about 35 years, it was the only centerfire rifle that Dad hunted with. Dad hunted a lot and in different states, and the number of deer, hogs, and black bear this rifle has felled is too numerous to count. The rifle has seen many long days in southeastern Tennessee, western North Carolina, and southern Alabama, and it appears in countless family photographs with tired, successful hunters.

Over half of the bluing and most of the finish from the wood has been worn off. The rifle is a real workhorse__. Dad said “clean and dry” is the only way to keep a semiauto working correctly, and based on the results, it’s hard to argue. The rifle has never worn a scope and has had the same magazine and set of buckhorn sights for as long as I can remember. The old 740 is not pretty and may not be a tack-driver, but it works and is part of the family.

Vote and comment below. Readers with good memory may recall that Jack’s 740 appeared here once before. I have tried not to reuse guns in Gunfight Friday, but Dewman’s BAR needed another semiauto to go up against, and I was fresh out. Besides, Jack asked for a BAR-740 fight, and we are all about customer service here at Gunfight Friday. I will perhaps reuse guns again in future gunfights, depending on reader reaction and my picture inventory, but that is no reason not to keep the gun pictures coming to fsgunnuts@gmail.com.