We’ve got a couple of turkey guns again today. One is not a dedicated turkey gun, however (as evident by... 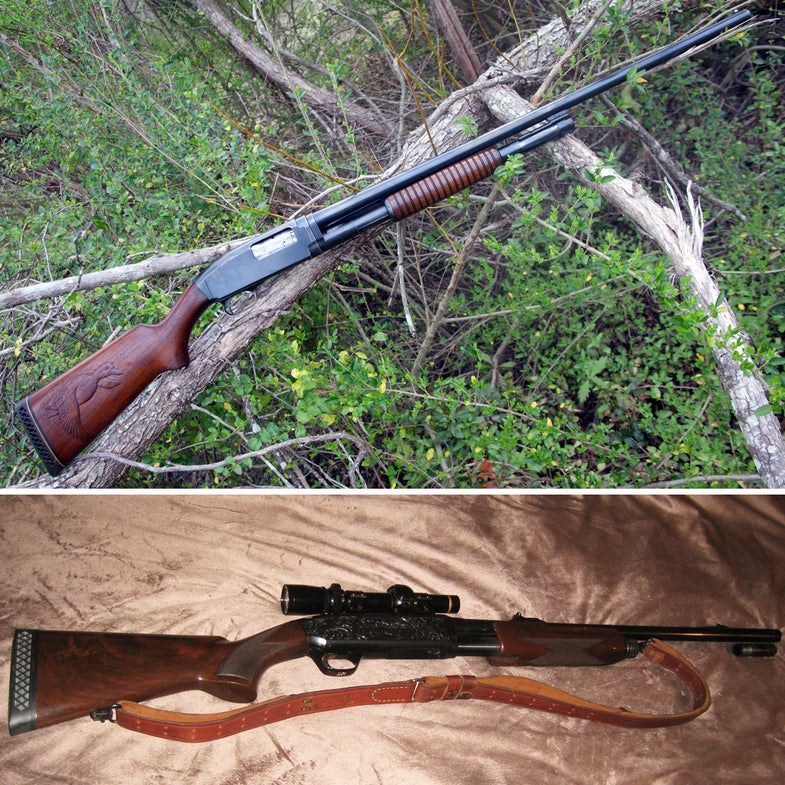 We’ve got a couple of turkey guns again today. One is not a dedicated turkey gun, however (as evident by the mallard on the stock), while the other is intended for turkey loads and slug shooting. Neither is very common.

The Savage 1921 was made only from 1920 to 1928 and in fairly low numbers, so you don’t often see them. In fact, I’m not sure I ever saw one until I looked at this picture. On the other hand, the BPS has been around since the 1970s and has been made in large numbers and is still popular today. The version Jhjimbo submitted was introduced in the early 1990s and has since been discontinued in favor of fully rifled models. Blue Book lists it as in production until 2013 but I don’t remember seeing any after the mid-1990s.

This is my plain-jane turkey gun: a standard 12 gauge, 2-3/4-inch full-choke Savage 1921. I normally don’t go for carving and this is a crummy rendition of a turkey, but it isn’t bad as a flying duck. The 1921 was the Savage answer to Winchester’s Model 12, with a different and somewhat complicated takedown arrangement (a lever) and a top-mounted thumb safety. Sadly, it won’t slam-fire like the Winchester but the thumb safety is nice. It likes 1-5/8 ounce loads of buffered 5s. Since plastic was not nearly as common in the 1920s, the front bead is probably real ivory.

_This is my turkey gun from Browning—a BPS 12 gauge pump. This is a rare gun; my exact model isn’t even in the Blue Book. I have never contacted Browning, but I believe it was limited production combination turkey and deer gun. The extended 5-inch rifled tube for deer is in the gun now, and the extended turkey full is next to it. The scope is a Leupold VXIII 1.5X5. All I use this gun for is deer and turkeys. The interesting thing is, with the scope sighted in at 75 yards and with Winchester Supreme 3-inch sabot slugs, I can switch to the turkey choke and Remington 3-inch 4×6 duplex loads and the gun is right on at 50 yards for turkeys and I don’t have to change the scope adjustment. I don’t know if Browning planned it like that or if it just worked out that way with the ammo I use, but it is very convenient for me and saves on sighting in all the time. One side of the steel receiver has a turkey scene, and on the other side there are deer. It’s very accurate with either slugs or shot, and it has taken a boat load of game for me. _

I had a chance to test one of the first guns like Jhjimbo’s back in the early 1990s. It had a lock washer that sat under the barrel ring to tighten the barrel/receiver fit, and it was very accurate. I remember shooting a sub-two-inch five shot group with it, which was very rare with slugs back then.

At any rate, here are your choices. It’s nice to see at least two people still shooting turkeys with walnut and blued-steel shotguns unlike the plastic and camo 3½ inch monstrosities most of us (me included) carry. Vote and comment below, and keep the gun pictures coming to fsgunnuts@gmail.com.