There’s special satisfaction in owning a gun that’s one of a kind, and today we’ve got two custom deer rifles.... 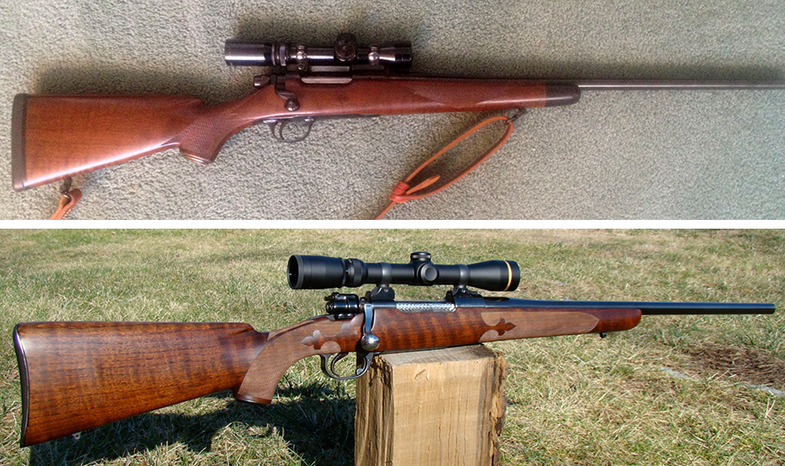 There’s special satisfaction in owning a gun that’s one of a kind, and today we’ve got two custom deer rifles. One was purpose-built to be a daughter’s rifle, the other, apparently, was just made to look good—and it does.

Both are chambered for old-school cartridges, as befits rifles with classically styled wooden stocks. One is a 7×57 Mauser, which is as venerable a cartridge as you can find. It was developed in the 1890s and has killed almost everything it’s possible to shoot with a rifle on this planet. The other is a .250-3000 Savage, developed in 1915 and quaintly named for its then-blistering 3000 fps muzzle velocity.

This is the rifle I had made up for my daughter when she became old enough to hunt big game. It’s based on a Remington 600 action that I had re-barreled to .250-3000. Then I had a friend of mine who’s good at making stocks make one to fit her out of a walnut blank. The floor-plate is steel and the grip cap is bronze. Barrel length is 21 inches and it’s topped with a Simmons 2-7X scope. The result is a handy little rifle that’s taken several head of pronghorn and deer. I’ve used it a few times on coyotes and rock chucks. It seems to prefer 75- and 100-grain bullets.

This older sporter, chambered in 7×57, is built on a Venezuelan FN military action. This rifle came from an online auction a number of years ago, though it’s never seen much use. It was to be my go-to deer rifle, but then I seem to think the same for every new rifle, and now my safe overflows with go-to rifles.

I know little of the origin of this rifle. It seems typical of the many Mauser conversions that were popular years ago, before the proliferation of good quality production guns. The medium-weight barrel is a Douglas, which includes a stamp reading 8/69 that I assume to be a date stamp. The bottom metal appears to be from a 1909 action. It is a good, solid rifle, leaving little to be desired in a sporter. If anything, I would have chosen a different configuration for the safety, such as a M70 style. It is also a bit on the chunky side for a 7×57, but a rock solid shooter.

There are your choices. Vote and comment below, and keep the gun pictures coming to fsgunnuts@gmail.com. I’ve been getting some good pictures lately, which, I hope you will agree, have resulted in some pretty good gun fights these last few weeks. It can’t happen without your help. Keep them coming, and thank you.