Last week’s gunfight pitted a couple of everyman rifles against one another. This week we get all fancy with a... 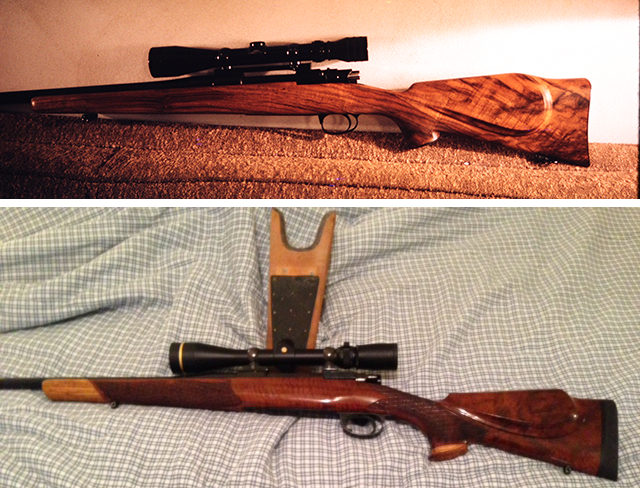 Last week’s gunfight pitted a couple of everyman rifles against one another. This week we get all fancy with a couple of custom beauties. Both are magnums—one a 7mm Rem. Mag, the other, a .300 Win Mag. You get to debate rifles and/or calibers this week. The 7mm Remington Magnun and the .300 Winchester Magnum were both belted magnums introduced in the early ’60s. They are extremely popular among those who like shooting things that are far away.

My father did the unthinkable: He dropped and broke the stock of his beautiful big-game rifle made for him by Lenard Brownell in .300 Win Mag. The original stock was maple. Brownell was able to pin it back together, but it was no longer sturdy enough to handle the recoil of the .300 Win Mag so he fitted the maple to a varmint action and barrel (the caliber escapes me).
The picture shows the .300 Win Mag in its second Brownell stock, which is made of French walnut. Dad suffered from severe rheumatoid arthritis and let the Win Mag go just before I was born; he realized the disease was taking over and he would never be able to go after big game again. He fondly said of it, “Boy, when you squeezed the trigger, it killed on both ends of the rifle.” He always regretted selling it, and I cannot tell you where it is today. It was rumored that Senator Sam Nunn from Georgia purchased the rifle, but that was never confirmed. I would love to know where the rifle is now. Maybe your readers can help.

Jay Moore from McAllen, Texas, made this 7mm Rem Mag for me in 1976. It has a Douglas premium barrel, Interarms Mark X Mauser action, Claro walnut hand-checkered stock, Conetrol mounts, and a VX3 Leupold scope. Jay was producing ½-inch MOA rifles 40 years ago, before most of us even knew what that meant. On its first trip to the range in 1976, it produced two groups with 3 touching holes in each group. I own other rifles, but this has been my go to gun for 37 years. Wish I could find some of his guns for sale.
There are your choices, and I don’t see how you could go wrong with either one. Vote and comment below and, as always, keep the gun pictures coming to fsgunnuts@gmail.com.