Today’s gunfight may be too apples-to-apples for some of you, but so what? It’s a chance to feature not one,... 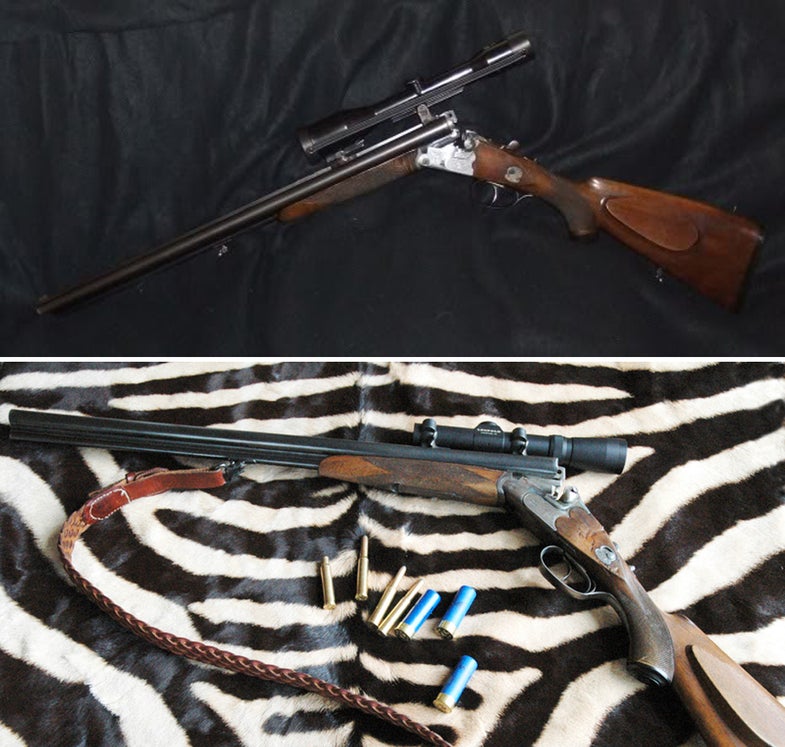 The drilling is designed to be a versatile gun to take any game, which suits not only German hunting traditions, but also makes a handy gamekeeper’s gun. Early in World War II, the Luftwaffe even bought 2,500-odd J.P.Sauer drillings and issued them to pilots as survival guns.

This is a Burgsmuller & Sohne gun made in 1940. The Wehrmacht was rampaging through the Low Countries and shoving the British off the beach at Dunkirk, and the Burgsmuller company in Suhl was still making sporting guns. There is no question that this gun came to the U.S. as some GI’s souvenir.

It has side-by-side 16-gauge barrels surmounting a rifle barrel in 8x57JR, the rimmed version of the 8mm Mauser using a 0.318” diameter bullet. I had my gunsmith fit a compact Leupold 1.25-4x scope in quick-detachable mounts so that it can serve as a shotgun or a rifle as needed. The level of craftsmanship and hand-fitting of these old guns is simply amazing, and it shows in its performance: It’s astonishingly accurate, far more than I ever expected it would be—it’ll put two bullets into the same hole at 100 yards every time.

I took it to Africa in 2013, where it served me well with numerous species: sand grouse, black-backed jackals, and a big male ostrich. Here in the U.S., it’s taken small game and a big whitetail doe on a cull, as well as a 250-pound feral hog. Everything was a one-shot kill. I hand-load Sellier & Bellot’s 196-grain round-nosed soft-point bullets.

It’s by far the most versatile gun I’ve ever owned—good for flying game and with ample power for just about anything short of a Cape buffalo. I wouldn’t hesitate to use it on a bison or an eland. It’s a real all-around gun.

This is my Krieghoff drilling. This particular one is the Waldschutz version, made for foresters and gamekeepers. It’s a bit more of a working gun than some drillings. It has short barrels and a dural alloy frame, so it’s very light (6 pounds without scope) and handy, and has two 16-gauge barrels over a 7x57R, which make it a very versatile hunting tool. I can wander the bush ready for anything, from birds to rabbits to pigs to deer. I had a 6X Hensoldt scope on it, but I’ve since gone with a Nickel 1.5-6X, which allows me to use the shotgun—even on flying game—without removing the scope. Of course, the scope is on claw mounts, so I can take it off and replace it easily, too.

Dural in Daniel M’s gun is duralumin, a lightweight alloy developed in 1909 and used in the construction of airship frames and, for a time, in some firearms. Pick a drilling, vote, and comment below.

So pledge week is over and we’re back to our regularly scheduled column. Thanks very much to those of you who contributed guns. I have some good ones to put up over the next few weeks, and Gunfight Friday lives on thanks to all of you. I always need more guns, though, so please keep them coming to fsgunnuts@gmail.com