Today’s gunfight is a treat: We’ve got two heirloom Colt revolvers, one a genuine relic of the Old West, the... 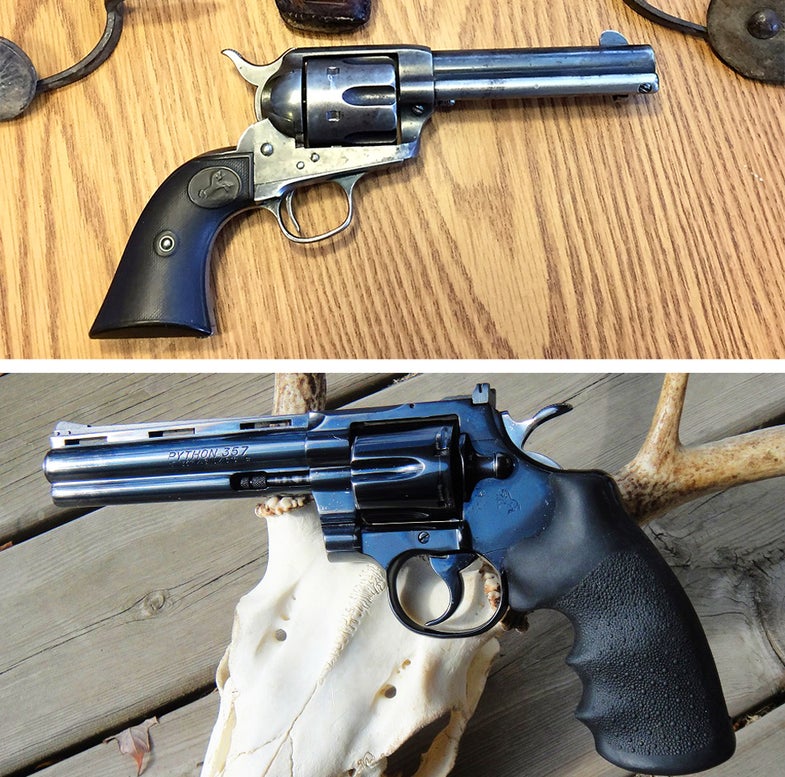 Today’s gunfight is a treat: We’ve got two heirloom Colt revolvers, one a genuine relic of the Old West, the other a more modern gun from the 1960s. Both have been handed down, one from father to son, the other through several generations.

This is my SAA Colt chambered in 38 WCF (38-40). It’s one of our family’s heirlooms and was handed down from my step-great-grandfather. Interestingly, the accouterments shown probably originated from his father, an old-time cattle baron, who, according to family lore, owned five ranches. The Colt couldn’t have been the older man’s, though, since it was made in 1897, which was after he’d died. This is a “transitional model” made during the change-over from black to smokeless powder. The Colt is in excellent working condition, since, in 1970 or so, I had its mainspring replaced and its sear repaired. As a small child, I was sometimes allowed to use the broken gun to play cowboys and Indians. Though the bore is nothing great, the gun still shoots fairly well. I’ve often pondered shipping the old thing to Turnbull to have it restored, since it shows every bit of its 119 years of existence, but, frankly, I’m conflicted on this. Any thoughts?

The leatherwork, including the spurs, was made by J.S. Collins, a noted saddle-maker and leatherworker; and, incidentally, it’s worth more than the revolver itself. The binos were a French make common at the time and are about 3x at most.

_This a Colt Python from 1969. It’s an E series that my dad bought used in 1972, if I recall correctly. He killed a lot of chucks with it, although he usually shot a 3 Screw Super Blackhawk. He sent it to the Colt custom shop, in 1980, for trigger work, and now it’s “tolerable.” I shot it quite a bit growing up, and then Dad gave it to me for my birthday a few years back. I killed a coyote with it, then the small 8-pointer in the picture. I have the box, papers, and grips, but I put Hogues on it, because all my revolvers and pistols wear them. The gun has holster wear, which might offend some folks, but I am a user, not a collector. I once got caught in a heavy rain with it and did a complete tear down to make sure nothing bad had happened. It’s now my sunny-day hunting gun. _

It’s hard to go wrong with these two. Vote and comment below. I should point out that great gunfights such as this come to you fifty-two weeks a year for absolutely free—all I ask for in return are your gun pictures. Keep them coming to fsgunnuts@gmail.com.

make your own quiz