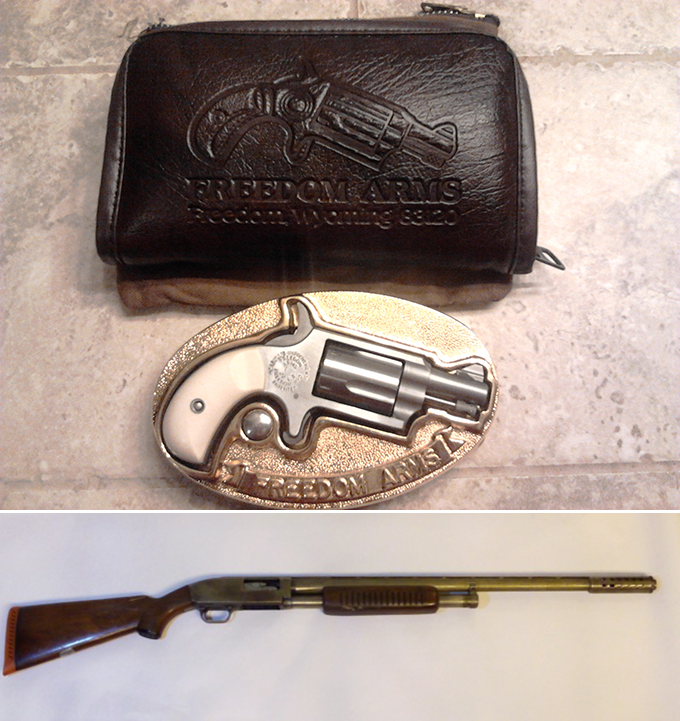 At first glance, today’s guns have nothing in common. Actually, at second glance they don’t have anything in common, either. But they do share one trait that has proven important to Gunfight Friday readers: Both have been handed down through the generations from grandfather to grandson (well, grandfather to son to son-in-law in JS’s case). So, this is another Heirloom Edition of Gunfight Friday.

The freedom arms Mini-revolver was the first offering from a company that would become much more known for great big revolvers in powerful cartridges. Freedom Arms was founded in 1978. J.C. Higgins Model 20 was made for Sears by Hi Standard. The choke device on the gun looks like a Cutts Compensator but is actually a Pachmayr Power Pac that worked very much the same, with interchangeable tubes. Some J.C. Higgins guns had decent walnut on them, as this gun does, along with a brass medallion for your initials in the stock.

Here are the guns, and their family stories:

My grandfather bought this Freedom Arms .22 LR mini-revolver from the factory in Wyoming many years ago. As you can see it came with a unique accessory: a form-fit belt buckle in which to carry it. The gun was passed down to my father at Grandpa’s passing, and my father in turn passed it down to me. Handing it down as family heirloom is about all it’s good for. Well, that, and wearing to the “open carry” rally at the state capitol, I suppose. It is a neat conversation piece, though.

This is a J.C. Higgins Model 20 12-gauge shotgun. It belonged to my wife’s grandfather. Her grandfather was a cleaning it ceremoniously in front of my wife’s dad the first time he took his daughter (my mother-in-law) on a date. My father-in-law handed it down to me when I expressed an interest in keeping it in the family. When I received the gun, it was covered in camouflage tape and a light coat of rust. Someday, I plan to restore it and pass it down to my son. I love the idea of him owning his great-grandfather’s well-used shotgun.

My wife’s grandfather passed away before I had a chance to meet him, but I am told the gun has taken many ducks, pheasant, and quail. I have never hunted, but I was recently invited to hunt turkey by a good friend of mine. I asked him what I would need. He said, “Just show up covered in camouflage, I have a gun you can use.” I plan on taking him up on the offer, but there is no way I will be passing up a chance to bring this shotgun out of retirement.

I will confess, I have been trying to find a matchup for the Freedom Arms revolver since it came in a year ago and this unequal gunfight is the best I could do. Deal with it. Vote and comment below, and send your gun pictures to: fsgunnuts@gmail.com.