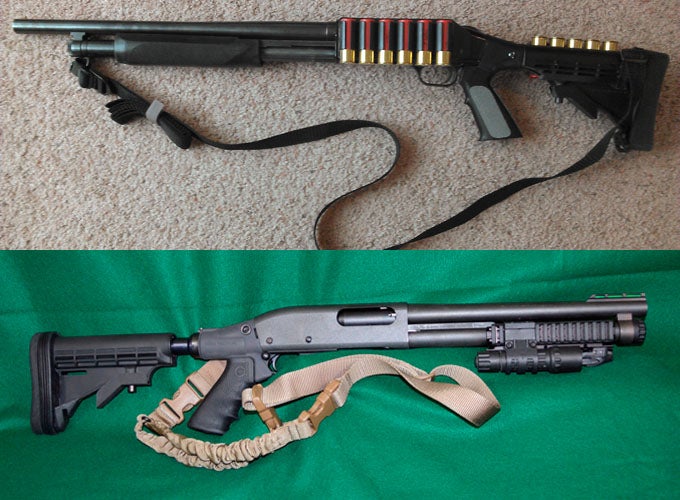 One of the most common questions I receive is, “Should I buy a Remington 870 or a Mossberg 500?” Today it’s your turn to answer it. The 870 and 500 are probably the two most versatile shotguns ever made in terms of all the configurations and parts made for them. Both of them have likely taken every game bird and animal you could possibly shoot with a shotgun. They have also both served in the military and in law enforcement — and still do today. For this gunfight, we have two set up as home defense guns. With over 10 million of each gun made, chances are you own one or both of them yourself.

The ultimate in home-defense. I bought this Mossberg 500 a while back for on-duty use. My current department requires me to keep a Remington 870 in the car, so this has become the gun to reach for when the wife swears she hears someone trying to get in the house at Oh-Dark-Thirty. An open choke on a barely-legal 18 inch barrel means you’ll hit what you’re aiming at. A telescoping stock keeps the gun maneuverable indoors. Two (yes, that’s right, two) side saddles means that this gun carries 17 rounds when fully loaded. Loaded with No. 4 shot means you don’t have to worry about blowing a hole through the neighbor’s house, but it still hits plenty hard at close range. I know a lot of people prefer the 870. I admit, it has a smoother action and a better trigger, but it’s tough to beat a Mossberg for reliability. And let’s not forget, there is no sound more terrifying to a home invader than the racking of a 12 gauge. Dirty Harry can keep his hand cannon; I’ll take my Mossberg.

I think I built this Remington 870 for little other reason than to prove my wife has a sense of humor in allowing me to pursue my pleasures in life. It would make an excellent home protection shotgun if the media wouldn’t descend like vultures upon anyone who risked using it for defense. With its 12-inch barrel, it is short enough to maneuver through a house or carry in a vehicle. It has a collapsible stock, Hi-Viz front sight, light, and laser sight. The grip has a compartment I use to carry spare batteries for the Crimson Trace and a copy of my Form 4 in case law enforcement ever gets curious. It is unbelievably fun to shoot. Between the Mesa Tactical Hydraulic Recoil Stock and the Limbsaver pad the recoil is very manageable.

The Form 4 Tim F. refers to is the transfer form you fill out when buying a Class III restricted firearm. It is entirely legal for him to own a shotgun with a 12-inch barrel. Anyway, there are your choices: a Model 500 that carries most of a box of ammunition in its magazine and side saddles or an 870 with a Crimson Trace laser sight. As always, vote and comment below, and send more gun pictures to fsgunnuts@gmail.com