Two bird guns, a classic and an underappreciated oddball, face off today. The classic is the Ithaca Model 37, introduced... 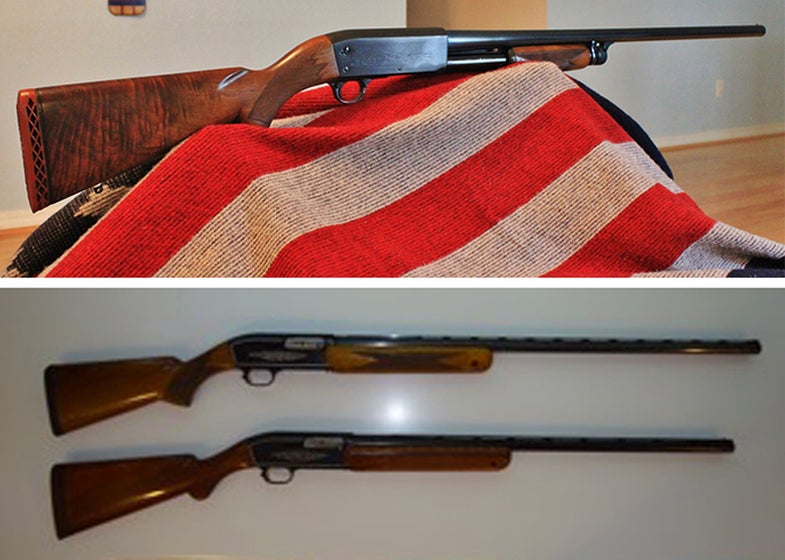 A classic and an underappreciated shotgun face off..
SHARE

Two bird guns, a classic and an underappreciated oddball, face off today. The classic is the Ithaca Model 37, introduced way back in 1937 and still in production. Although the 37’s history is somewhat checkered in recent years, this particular gun dates to the Model 37’s glory days, and it’s a dandy.

The Browning Double Automatic was the creation of John Browning’s son Val. It’s a two-shot, recoil-operated semi-auto. Some would call it the answer to a question no one asked, but those of us who own Double Autos (or in my case, have owned) can tell you that they are light, lively upland guns. Double Autos came in a standard steel-receiver model, a light Twelvette at under 7 pounds, and a really light Twentyweight that scaled around 6 pounds in 12 gauge. The receivers came in different colors—red, green, etc.—and they were made from 1955 to 1971.

This is a 1953 Deluxe model of the famed Ithaca 37 in 12 gauge (26-inch MOD). The tiger striping on the walnut makes it stand out at the range, and the bluing, engraving, and checkering are all in great shape. Since it’s more than 60 years old, it’s my fair-weather gun, and I tend to baby it. (My Nova takes the rougher days.) I have a lot of confidence with it, because it points so beautifully and the action is so slick. I’ve never owned a real high-dollar shotgun, so I treat this one like it is.

_These are my wife’s shotguns. The bottom one is a Browning Twentyweight with a 25¾-inch barrel that came with a modified choke from the factory. I left the choke alone but shipped the plain barrel off to have a rib soldered on. With the added rib, it weighs 6.2 pounds unloaded, and it’s a pretty fast-handling shotgun. _

The top one is a Browning Double Automatic Twelvette with a 30-inch barrel that came with a full choke. I sent the barrel down to Briley and had them install a thin-wall choke systems. The shotgun weighs 6.6 pounds unloaded. The Twelvette is my wife’s primary shooter. She’s 5’ 4” and since the aluminum receiver is so much lighter than steel, she has no trouble with the 30-inch barrel. We were in Reno at the now-closed Sagehill Trap Club, during one of their big shoots, and had a gunsmith cut down the stock to her dimensions and add a Decelerator recoil pad. She is really happy with it.

Thank you both for sending your pictures. Ordinarily, we prefer pictures of one gun at a time, but two Double Automatics is kind of like the Doublemint Twins: they double your pleasure, as the ad used to say. Vote and comment below, and keep the gun pictures coming to fsgunnuts@gmail.com