Today’s gunfight pits two Japanese o/u’s against one another. Sadly, neither is made anymore. It took a while for Americans... 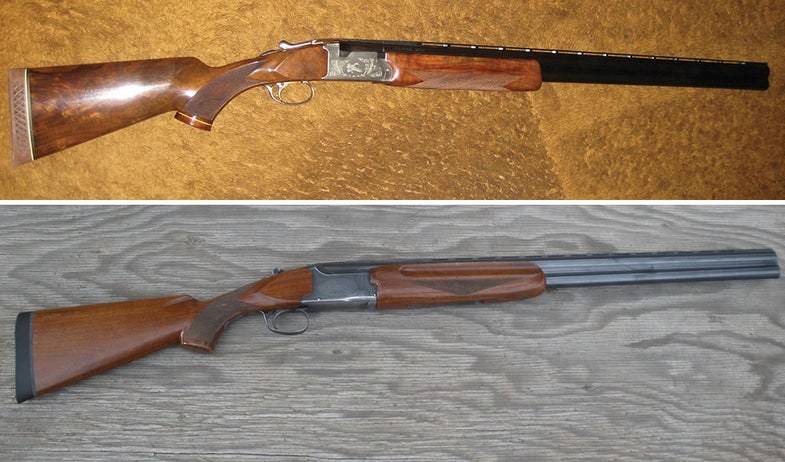 Today’s gunfight pits two Japanese o/u’s against one another. Sadly, neither is made anymore. It took a while for Americans to accept Japanese-made guns, but we couldn’t ignore them forever because they were excellent. At least we recognized their quality before they were gone (and Miroku still makes guns). Neither the orginal Winchester 101 nor the Weatherby Orion is made anymore. The Kodensha factory, where 101s (also Nikkos and Parker Reproductions) were made, was torn down in the late ’80s. SKB, which made both SKB and Weatherby shotguns, went out of the gun business a few years ago. Fortunately, lots of examples of both remain, and today we’ve got two dandies.

Paul’s 101
Here is my Winchester 101 in 28 gauge. My grad-school classmates typically received pens or watches from their families at graduation. Imagine my surprise when my mom presented me with this beauty! I tested it out on the local trap field, which is a bit of a challenge given fixedskeet chokes. It is great fun to shoot skeet with, and I have done some walks in the woods with it, although not nearly enough. It will likely make a nice gun to start my youngest with.

Jhjimbo’s Orion
This is my Weatherby Orion Grade III, 12-gauge o/u shotgun. It has 30-inch barrels, a single-inertia trigger, auto ejectors, and a barrel selector in the trigger. I use this for skeet and some small game. The wood is beautiful so I try to take care of it and not abuse it. The long barrels give it slight front-heavy balance but it seems to suit me well. This was made in Japan by SKB, the maker of other fine firearms. This is one of my favorite firearms.

There’s your choice: a 28-gauge graduation gift from mom, or a 12-gauge for the field and the range. For me, I’d like to vote “both” but you may have other opinions. Vote and comment below.
And send me gun pictures. I am running low on new material, and I can feel another Aston Martin vs. Zombie survival vehicle matchup coming on. Very few of you are sending in gun pictures. It’s your gun’s chance for 15 minutes of fame. Take it.