You never forget your first rimfire, and if you’re smart, you never sell it. Today we’ve got two rifles that... 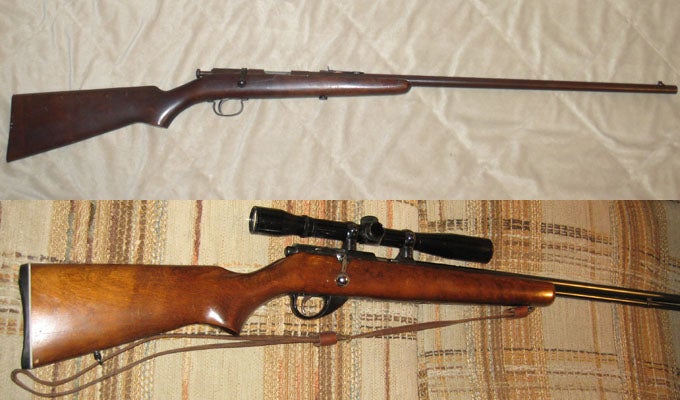 You never forget your first rimfire, and if you’re smart, you never sell it. Today we’ve got two rifles that may not look like much, but I bet neither one is for sale for any amount of money. A Remington Model 33 goes up against a J.C. Higgins bolt action. If you haven’t heard of the single-shot Remington Model 33, it’s because it was only made from 1932 to 1935. The Sears/JC Higgins .22s were, I believe, actually Marlins, and this one looks like a Marlin 81, a bolt-action, tubular-magazine rifle made from 1937 to 1970. Both of these rifles are rich in sentimental value.

This was my dad’s .22 rifle that he bought about 1941 from a man in Fayetteville, Ark., for $14. It is a Remington Model 33 single shot chambered for Short, Long, and Long Rifle and has no serial number. This is the rifle my three brothers and I learned how to shoot with. The Model 33 has accounted for many opossums, raccoons, skunks, snakes, at least one red fox, and too many squirrels and rabbits to count. In fact, it was the rifle I used to take my first ground squirrel with over 40 years ago. It now has an honored place on my wall with my other guns. Somehow in spite of all of the dings and cracks in the stock it still looks pretty good to me. As far as accuracy goes, it can take a bottle cap off of a bottle at 20 yards with the open sights. Not bad for a rifle born in the early part of the last century.

Here is my J.C.Higgins .22lr squirrel gun, purchased in 1957 at Sears. If I remember it was $39.95. I can’t begin to guess how many squirrels I have got with this gun. Just before going in the service I put 60 in the freezer. I was always asked to make head shots if I could. I used to put the gun on my shoulder, with a few shells in my pocket and ride the bus to the edge of town. I’d shoot my limit of squirrels and then ride the bus back home. I have put a couple bricks a year through it. That works out to about 57,000 rounds. I’ve never had a problem and no parts failed. It started out with a smaller diameter 4x scope on top, then I moved up to a 4x, one-inch scope, and now has a 8×32 on it. It still accompanies me to the range right along with the big guns.

There’s your gunfight: two humble rifles with great backstories. Vote and comment below and please keep the gun pictures coming to fsgunnuts@gmail.com.