Today we have a gunfight between two O/Us. One is a (made-in-Japan) American classic; the other a lesser-known O/U made... 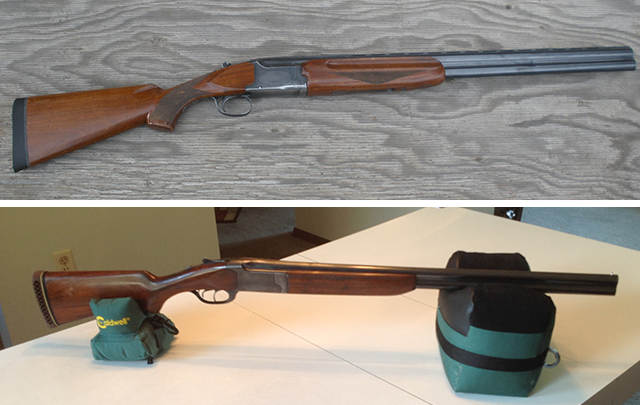 Today we have a gunfight between two O/Us. One is a (made-in-Japan) American classic; the other a lesser-known O/U made in the U.S.A. One is a 12, the other a 16-gauge. Both of these guns are well-used and still in the field today.

The Winchester 101 was made in the Olin Kodensha factory in Japan from 1963 to 1987, then under the Classic Doubles name until 1990. The 101 was an excellent gun, well made, well finished, and lightweight in the field models. It was made in a number of grades in target and field versions. The Kodensha factory, incidentally, also made its own line of Nikko guns. As the story goes, Winchester only had a couple of employees at the factory to keep an eye on 101 production, and the Japanese would take all the best stock wood for their own Nikkos. Unfortunately the Kodensha factory was torn down and replaced with an auto factory years ago.

Marlin’s Model 90 was made from 1937 to 1958. After the demise of the Remington 32 in 1944, the 90 was the only American-made O/U on the market for many years. Never a high-end gun, the Model 90 had a malleable iron frame, causing some of them to have a purplish cast to the receiver. But it was also tough and durable, with strikers in place of hammers. Many had double triggers and most had no top rib. It came in target and field models and some grades were engraved.

I got this Winchester second hand from a shooting club that closed its doors. It’s had thousands of rounds through it and plenty of honest wear to wood and metal. It still locks tight and shoots right. It’s a 12 gauge with 2 ¾-inch chambers and interchangeable Winchokes ahead of 26-inch barrels. It is super light, so I replaced the stock plastic butt plate with a Limbsaver recoil pad after my bruising first hunt with it. Winchester 101s are notable for quality construction, lively balance and pointability, as well as fine fit and finish, including artful engraving. Though some purists scoff that these were made for Winchester in Japan, this is the best shotgun I have hunted with in the grain circles and corners of Kansas. I can change chokes and take it to the waterfowl blind or turkey woods.

This Marlin model 90 originally belonged to an uncle. It came to me after he passed away a couple of years ago. He had the recoil pad installed at age 92. He said it was getting too hard to shoot without one! This is one of those classic “blue collar” guns that were well made, inexpensively, and continue to perform as well today as they did when they were new. As far as I can tell it is pre WWII, based on the serial number (7177) with no prefix, the bird dog engraving and the solid rib between barrels. This 16-gauge sweetheart accompanied me to Maine last year for grouse and will be my go to gun for a pheasant hunt in mid October. I love the way it handles and shoots! Another one of those nothing-fancy guns that won’t quit.

For me, this is definitely one of those “one of each, please” gunfights. I have always wanted a 101, and this model—a later one with choke tubes—is a nice, versatile gun. The Marlin is just cool, and a lesser-known curiosity besides being a good, inexpensive gun. Your opinions, no doubt, will vary. Voice them in the comments box below, vote, and keep those gun pictures coming to fsgunnuts@gmail.com.