We have another fight between sporterized rifles this week. Given today’s trend to make everything more tactical, it’s refreshing to... 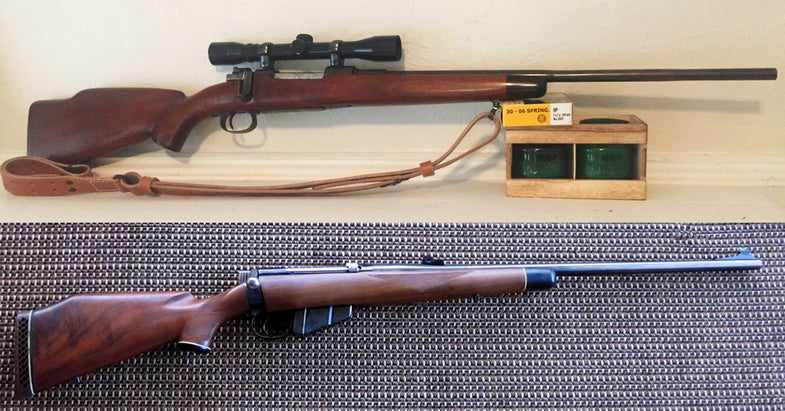 We have another fight between sporterized rifles this week. Given today’s trend to make everything more tactical, it’s refreshing to see guns made less tactical every once in a while.

The guns are = familiar candidates for sporterization: the Mauser and the Enfield. This particular Mauser is a Colombian rifle made by FN and converted in 1952. Those of you following along at home may recall that this is the second rebarreled Enfield submitted by New River Outdoorsman, the previous rifle being a .45-70.

This is a 1918-vintage Short Magazine Lee-Enfield (SMLE) #1 Mark III that has been sporterized, but it’s not your usual Bubba-in-the-basement job. Re-stocked with a beautiful walnut Monte Carlo-style stock, the action was properly polished and deeply blued. But the real surprise is that it is not a .303; it has been re-barreled in 7x57R.

The original .303 barrel was shot out and badly damaged by corrosive ammunition. The customizer chose the 7x57R, because the flat face of the SMLE bolt works as well with that round as with the rimmed .303. The 7x57R is the ballistic equivalent of the better-known 7×57 (rimless) Mauser. A wider variety of cartridges is available in 7mm diameter than in .303, and, with a proper shell holder, the same dies used for the 7×57 can be used to reload the rimmed version. Factory-loaded ammunition is available as well, from Norma, Prvi Partizan, and Sellier & Bellot. The 7x57R is a flat-shooting, mild-mannered caliber, suitable for any game in North America, and the SMLE action is strong enough for it to be loaded to its full potential.

There is a dubious allegation that British forces in the Boer War were “outgunned” by their enemy’s use of Mauser rifles in 7×57 caliber. This customized rifle shows that they needn’t given up the very real advantages of the Enfield action over the Mauser (10 shots versus five, a detachable magazine, and a rapidly operated bolt) had they chosen to use the 7x57R caliber instead of the .303.

Up for this Gunfight is my R.FAMAGE 52 sporter. After the birth of my first daughter, my father purchased this rifle for “us”. This old .30-06 still has its military barrel, albeit cut down to 22 inches and tapered (probably with a hand file). The weekend gunsmith made a faux butterknife bolt and bedded the action in a Bishop stock. I’d never seen the type of rings this rifle has, but they hold the fixed six well enough for any shooting I do. I’ve found the Mauser to be more accurate than I expected, and the recoil is tame, even when running hot 180-grain loads for boar.

There are your choices. To throw in my two-cent’s worth, I would say the British weren’t so much outgunned by the Boers as they were outshot. Members of the Boer Kommandos (militia) learned to hunt, shoot, and ride at a young age, which made them terrific marksmen and formidable guerrilla opponents. Also, it was very thoughtful of Cameron’s father to give him a present for his daughter that he could put to good use until she grows into it.But, I digress.

Vote and comment below. Keep the gun photos coming to fsgunnuts@gmail.com.