Today’s gunfight is a rare shotgun vs. rifle matchup, but the guns have more in common than not. Both are... 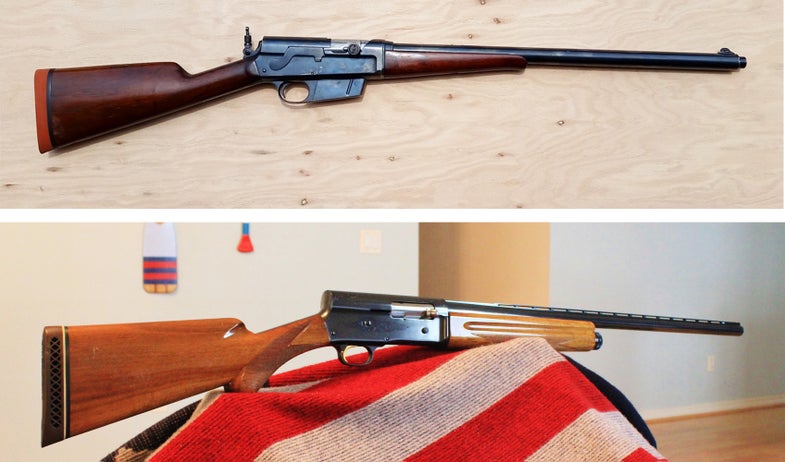 Today’s gunfight is a rare shotgun vs. rifle matchup, but the guns have more in common than not. Both are semiautos that sprang from the mind of the great John Browning. Both have long-recoil actions, and were patented way back in 1900. If you look at the squared-off receivers, you can even see the family resemblance between the two.

Here’s a 1966 Belgian-made A5 Light 12-gauge with a 26-inch full-choke barrel. A guy was having problems with it cycling, and I swapped him a Mossberg 500 for it. One new recoil spring later and this puppy was up and running. The stock has a few minor scrapes and dings, but I love how solid the receiver feels. I’m a sucker for the classics, so I was excited to get hold of this humpback.

This is my Remington Autoloading Rifle AKA the Remington Model 8. This particular rifle was produced in 1908 and is chambered in .35 Remington. The rifle was designed by John Browning and was a modified version of a Model 8 used to stop Bonnie and Clyde.

My rifle has a somewhat less storied history than the one used by the Texas Rangers. I inherited the gun from my uncle about two years ago. In looking through his photos, I can’t find a single hunt he might have taken it on; all I can figure is that it was priced right at the pawn shop.

I’ve replaced the butt pad and a couple of the internal springs, which had worn out. At the range, I can get it to shoot minute-of-hog groups from both standing and sitting positions. This fall I’m taking it to the South Carolina low country to pick up some pork chops.

A couple of notes: given that a factory-new Browning recoil spring costs about $12, a Mossberg 500 for an Auto 5 ranks as perhaps the best gun trade in Gunfight Friday history.

Ben mentions the Model 8 used to gun down Bonnie and Clyde. The whole story of that rifle and its owner, the very dangerous Ranger Frank Hamer, can be found in “Famous Firearms of the Old West” by F&S regular Hal Herring.