This week’s Gunfight Friday pits two woods rifles against one another. Although they’re intended for the same purpose and both... 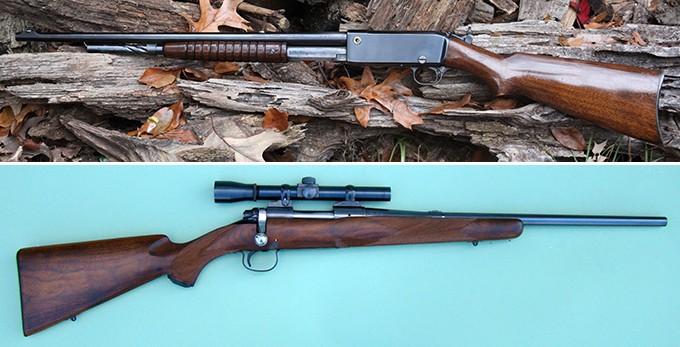 This week’s Gunfight Friday pits two woods rifles against one another. Although they’re intended for the same purpose and both made by Remington, they’re quite different. One is an old classic, the other a nice do-it-yourself job.

Both are chambered for venerable cartridges: The .35 Remington dates to 1906, and shoots 200 grain bullets at modest velocities and was originally intended for the Model 8 semiauto. The .300 Savage was designed in 1920 with the strong Savage 99 lever action in mind. In the mid-20th century it was very popular here, but the .308 surpassed it. Interestingly, according to the .300 Savage’s Wikipedia page, it remains very popular in France today.

Here are the rifles:

This is a photo of my Remington 14 with a Lyman peep sight sitting on some genuine South Carolina fatwood. My rifle is chambered for .35 Remington. The Model 14 has a 22-inch barrel, which is perfect for the original chamberings of .25, .30, .32 and .35 Remington. The action, even when new, is slick as goose dookie and the .35 Remington load is even sufficient for moose and elk at modest woods ranges. The bolt locks very close to the head so cases don’t stretch and the spiral grooves in the tubular magazine tilt bullets enough so pointed bullets can be used (although none are offered anyway, save the unique Hornady plastic-tipped which are OK in any tubular magazine such as Marlin’s 336).

The nifty cartridge head the receivers wear on their left side is not really a cartridge head at all but a brass filler made to look like a cartridge head and placed to allow assembly access. The design is by a genius of his time, J.D. (John Douglas) Pedersen. The Model 14 was introduced in 1913 and replaced by the less desirable 141 in 1935.

I am mostly an eastern hunter, drawn to short, handy rifles with carbine-length barrels. Regrettably, many compact factory rifles are fitted with pencil-thin, light weight barrels that seem very appealing, at least right up until it becomes time to shoot at something. They often balance poorly, are difficult to shoot well in the field, and produce accuracy that rarely meets expectations.

So, I bought this older Remington 722 in .300 Savage with the aim of creating a solid, compact, accurate woods rifle without spending money on custom gunsmithing. The factory barrel barrel was cut down and finished at 20 inches. I have some experience with finishing and checkering as a hobby, but not so much with shaping and inletting. With a few hand tools, and guided mostly by YouTube (especially Larry Potterfield’s really great videos), I removed a great deal of wood from the factory stock, adding the grip cap and two-screw studs. The finish is traditional boiled linseed oil, and the checkering a simple point pattern. The scope is a Leupold Alaskan in vintage Buehler mounts. The result is perhaps not up to professional standards, but it’s quite satisfying nonetheless. Some will argue that the model 722 is not worthy of such an effort. It’s hard to beat the cost though: $359 for the rifle and a bit more for the grip cap and swivel studs. Of course there was also the time I invested—and quite a lot of it!

Take your pick, vote, and comment below, and please send more gun pictures. Although both of these excellent pictures arrived recently, the Gmail box is not quite as overflowing with gun pictures as I had hoped it would be after you all made New Year’s resolutions to participate in Gunfight Friday more. The year is young and there’s still time. Send your gun pictures to fsgunnuts@gmail.com.