It’s a rimfire Gunfight Friday, pitting what must be the most popular rimfire of all time against an old favorite.... 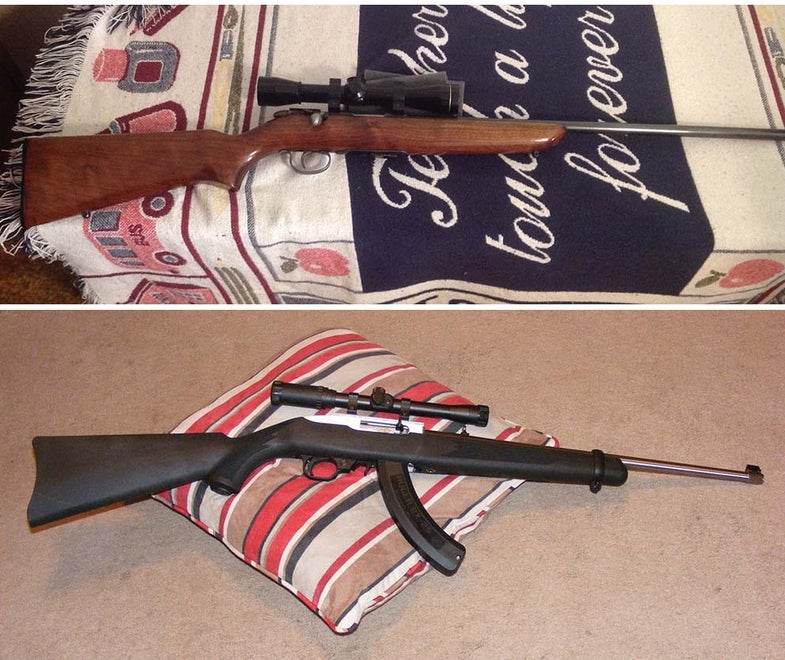 It’s a rimfire Gunfight Friday, pitting what must be the most popular rimfire of all time against an old favorite. Coincidentally, both rifles were introduced in 1964. Remington’s inexpensive but accurate bolt-action 511 was made from 1939 to 1963, then reintroduced as the 511-X in 1964 and made for a few more years. Ruger has made over 5 million 10/22 semiautos since 1964.

This is the 50th Anniversary edition of the legendary 10/22. The synthetic stock weighs next to nothing, and looks incredible with the stainless barrel and receiver. I’ve added a cheap rimfire scope and the Ruger BX25 magazine. This is the most fun I’ve ever had shooting a rifle, hands-down.

This is my 511-X Scoremaster we all call the Squirrelmaster. I use the flush-fit six-round magazine, because the 10-round mag keeps poking my back. I originally had a Weaver wide-angle 4x on it, but when my wife bought me the new Leupold VX-2 3×9 for my mountain rifle, I put my 4x Leupold on the 511-X. I removed the open sights, as I tore a couple of nice soft cases with them. From tree squirrels in Michigan and Missouri, to gophers in South Dakota, to prairie dogs in Colorado, the rifle has never let me down. I bought it used in 1972 in exchange for chopping corn out of bean fields. The farmer and I both swear we got the best of that deal.

There are your choices. Vote and comment below. I would like to commend both readers for their effective use of background upholstery in these… AND ALSO FOR SENDING ME PICTURES! I struggle every week to find matchups for this feature. More pictures of more guns means better Gunfight Fridays for everyone. Please send pictures and a few lines about the gun to fsgunnuts@gmail.com. Thank you.