Two .308s square off in today’s Gunfight Friday: a Remington 600 versus a Ruger Gunsite Scout Rifle. Besides their calibers,... 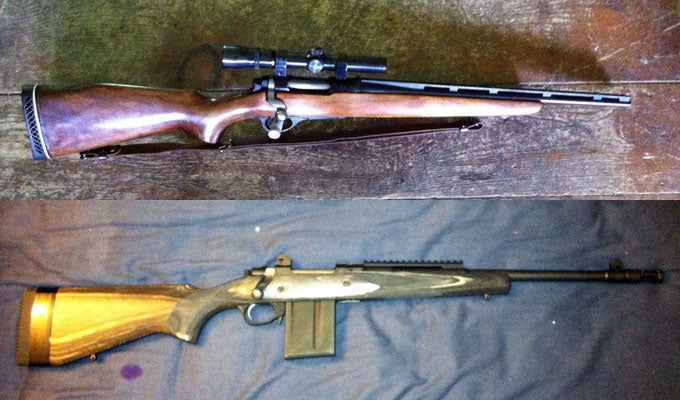 Two .308s square off in today’s Gunfight Friday: a Remington 600 versus a Ruger Gunsite Scout Rifle. Besides their calibers, both rifles share a connection with firearms guru Jeff Cooper.

The Remington 600 was made for only a few years in the ’60s before it was replaced by the also short-lived 660. It was short-barreled, very light, and fitted with a totally pointless but cool ventilated rib. The 600 was intended as a guide gun and it had a reputation for accuracy, for kicking, and being very loud when chambered for the .350 Remington. The 600 and similar 660 gathered a small cult following, which included Col. Jeff Cooper, who bought a 600 and made it into his first scout rifle. Cooper promoted the concept of the scout rifle — a short, light .308 with a long-relief low power scope as a general purpose hunting and fighting rifle.

Which brings us to our second rifle, the Ruger Gunsite Scout Rifle. Named after Cooper’s Arizona shooting academy, the recently introduced Scout Rifle is the “Gunsite approved” take on Cooper’s vision of an all-purpose rifle. It comes in .308 only, with a detachable 10-round magazine, a picatinny rail for a long-relief scope, and an 18-inch barrel with a flash suppressor.

Here’s the old Remington 600 in .308 with the old Weaver V4.5 on top. It’s a great brush gun, perfect for still-hunting here in Vermont. I saw it on the rack of the local gun store and thought it looked pretty neat but I knew nothing about the model. I did some research online and heard good things but also found out about the recall for the trigger/safety issue. [Remington recalled several models of bolt actions made before 1982, which had a feature that locked the bolt in place when the safety was on, which could lead to accidental discharges]. I went back in later that week, picked up the rifle and was able to recreate the trigger/safety problem (safety on, pull trigger, safety off, touch bolt handle, rifle fires). I showed this to the owner of the store, who was unaware of the problem. His reaction to receiving this rifle in trade was something that can’t be printed in a family magazine. Long story short, I told him that I thought the recall was still in effect, he said that he didn’t want to deal. Remington did the recall work in two weeks and I got a nice rifle at a rock-bottom price. The gun is a heck of a shooter and fills a nice gap in the woods between my ghost ring sighted Model 94 and my Model 700 in 30-06.

My favorite whitetail rifle is my Ruger Gunsite Scout. I mainly hunt from treestands in heavy brush so this light and short rifle is perfect. Ruger makes 3-, 5-, and 10-round capacity magazines for it. The 10-round metal magazines work flawlessly and I have six of them, but the 5-round polymag is enough for follow up shots for when tag No. 2 needs to be filled quickly. With handloaded 168-grain Hornady A-Max bullets and 42 grains of Benchmark powder, the gun is sub-MOA at 100 yards. Its best groups have been .87-inch at 100, and 1.73-inches at 200 yards. I have used a .30-30, a Daniel Defense AR-15, and Winchester model 70 in .243 to hunt but I will grab my Scout over all of these when it comes to laying down the waving white flags. The iron sights are all you need inside of 200 yards. I can’t wait to see how it does at longer distances, but for the hills of Kentucky this .308 is hands down the lightest, most accurate bolt gun I have ever owned.

Both readers said these rifles are perfect for their whitetail hunting needs. Which one would work for you? Vote and comment below. Remember to keep sending your gun pictures to fsgunnuts@gmail.com.