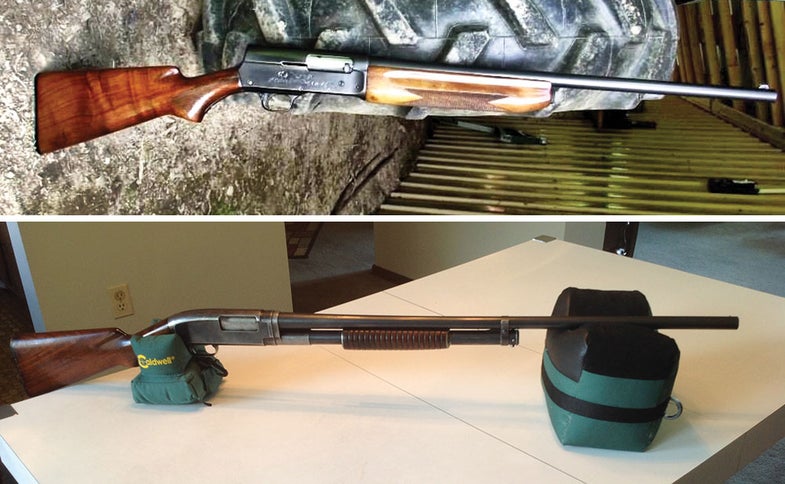 It’s another shotgun matchup this week, as two classics go head to head: Remington’s Model 11 vs Winchester’s Model 12. If you think the Model 11 bears an eerie resemblance to John Browning’s Auto 5, it does, because it’s essentially the same gun. Browning first took his new design for the very first self-loading shotgun to Winchester, but they couldn’t come to an agreement on terms. He went to Remington, as well as overseas to Belgium, with the gun. The Model 11 debuted in 1906, and over 850,000 were made until 1947. Winchester’s Model 12 pump was designed by Thomas Crossley Johnson, but was definitely inspired by Browning’s Model 1897. First introduced in 20 gauge in 1912, it was made for 51 years and earned the nickname “the perfect repeater” for its smooth action. The name was changed from Model 1912 to Model 12 in 1919, which makes Harold’s gun below a _Model 1912—_and that is very cool.

Andrew’s Model 11
This is my favorite shotgun to take in the field, a Remington model 11 in 12 gauge. Wood and metal have both been restored in my spare time. This is the later Sportsman 3-shot model with a plain full choked barrel.

What could be more blue collar than Winchester’s Model 1912? This one is circa 1917, based on the serial number and the fact that it belonged to my grandfather. I find that almost half of my rifles and shotguns originally belonged to relatives who have passed away. I guess that’s the price for getting older in a family of hunters and gun lovers. I’m sure this isn’t the prettiest Model 12 you’ve ever seen, but it has a lot of sentimental value to me—and I hope to the son who will eventually get it.

You know the drill. Vote and comment below and send me gun pictures to fsgunnuts@gmail.com. I am combing the Gunfight Friday submission archives, and the pickings are getting really slim. Send more.

Did I mention that Max Max: Fury Road features dozens—yes, _dozens—_of post-apocalyptic vehicles I could start matching up against one another if I don’t get more pictures?