This gun fight pits a revolver against a rifle, both .22 rimfire magnums. The owners trust these guns and rely... 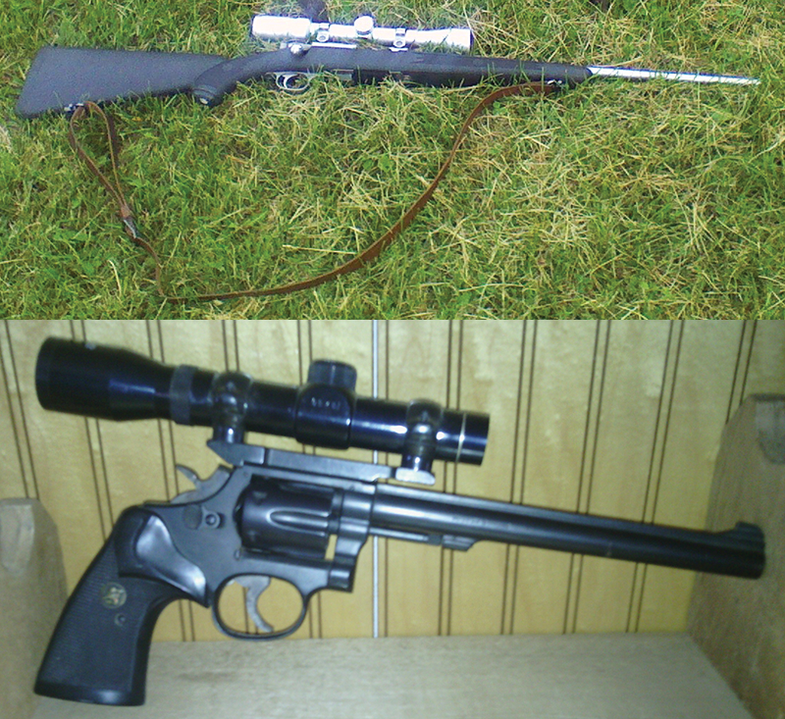 This gun fight pits a revolver against a rifle, both .22 rimfire magnums. The owners trust these guns and rely on them for small game and varmint shooting.

Both are chambered for .22 Winchester Rimfire Magnum, which came out in 1959. The .22 magnum boosted .22 rimfire velocities up into the 2000 fps range, making it a harder hitting, flatter shooting alternative to the .22 LR and more suitable for bigger animals than just squirrels and rabbits. The revolver is actually stamped “.22 MRF” which caused me no end of confusion when I looked it up, as some sources say it’s a different cartridge and others say it’s the same as the .22 WMR with a different name. FirstBubba, the gun’s owner, assures me that the MRF and the WRM are the same thing.

Back to our fight:

Here is one of my favorite rifles, a Ruger 77/22 in .22 magnum. I’ve been a fan of the .22 mag since it came out in 1959, even though it’s not the most accurate thing around. A farmer complained to me about chucks digging up his machine shed floor and wished he had somebody to get rid of them. I volunteered of course and he said “What do you drive? I’ll tell the neighbors you’re taking care of the farm.” I went out about a week later. I popped a bunch of them as they came out to eat at 50-60 yards. I dropped the biggest one at about 15 feet when I came around the corner of the machine shed and we surprised each other. All were one shot kills with plain old Winchester Western 40grain JHP ammo just like the original 1959 model. When I showed my pictures to the farmer he said “You are responsible to keep them under control” and every time we see each other he ask me if I got any more.

This is my scoped S&W M48. Yep! A .22 MRF! It’s basically the K22 Masterpiece chambered for .22 Mag. It was a Father’s Day present to my dad and came back to me in 1981. It stayed tucked away for obvious reasons. A spilled soft drink wreaked havoc with the original finish and it had to be bead blasted and blued to help hide most of the scars. Since the “collector value” was gone, I had a friend drill and tap it for a scope. It’s dead on at 100 yards. It’s my fall turkey “go-to” during “primitive arms” season. It’s only collected one tom but has claimed three ‘yotes. I don’t shoot it much because of the ammo is expensive and you can’t reload for it!

Pick your favorite and vote and comment below. Keep those gun pictures coming, too, to fsgunnuts@gmail.com.